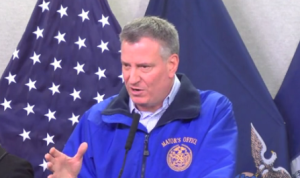 The consensus is mayor de Blasio had it tough the past week. But it was the mayor who put himself in this unpleasant position. Four top consultants – Republicans Richard St. Paul and Jake Menges, and Democrats Lis Smith and Evan Stavisky – graded the mayor’s response to the furor over keeping the schools open during the past snow blizzard and his call to the NYPD on behalf of his pal, as average to poor.

In a segment on NY1 Monday evening discussing the Mayor’s performance in handling the City through one of the most snowy and frigid winters and handling the press, Democratic consultant and former press secretary to Bill de Blasio during his campaign for mayor, Lis Smith gave his a C.

“I give him a ‘C’ because I think it was a very challenging week and I think that the NY media, in general, is not inclined to give politicians honeymoons,” Lis Smith told Errol Louis on Inside City Hall. “He learned that when it becomes being a mayor, ideology and giving lofty speeches is not as important as being able to deliver city services effectively and efficiently.

Smith added that amid the criticism, de Blasio and his team need to be focused first on delivering basic services to NYC residents before giving lofty and ideological speeches. “I think that he’s learning that competence should triumph ideology, and his ideological pursuits here,” she said.

“You know you’re in for a rough mayoralty when the weatherman predicts that you’re a one-termer just 43 days into the gig,” bob McManus wrote Tuesday in the NY Post.

“What mayor de Blasio didn’t yet grasp is, that his political imperatives are very different from Andrew Cuomo’s,” Smith said on Inside City Hall. “[De Blasio] is trying to appeal to New York City voters and national progressives, and Gov. Cuomo is trying to appeal to Weschester, Rockland, Suffolk and Nassau Counties, because that’s the suburban ring that will define the size of his margin of victory in November.”

Jake Menges, a senior adviser toRepublican Joe Lhota’s mayoral campaign, told NY1 Mayor de Blasio has done a very poor job handling the press, answering questions about his conduct and a poor job managing multiple tasks, “which is kind of what the criticism was of him before” the elections. Menges also said Giuliani defending de Blasio’s arrest inquiry was just about “being kind.”