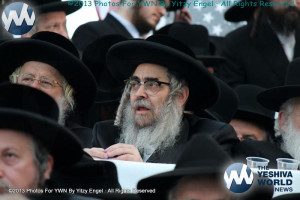 The Satmar Rebbe Rabbi Aaron Teitelbaum Shlita arrived in Eretz Yisrael on Wednesday, 19 Adar I 5774. On his way to daven mincha in Savion, where he will be hosted by philanthropist Meir Gurwitz, the rebbe was briefed on the Shaked Committee and the accompanying efforts to draft bnei yeshivos into the military.

The rebbe was reportedly startled and upset by the events and stated emphatically “Now everyone knows that chareidi Jewry must go to war, one that is heard around the world against the gezeiros in unity among all factions and communities”.

“We must launch a holy war towards safeguarding the bochrim that do not attend yeshivos. Even those who are not learning do not serve a punishment of spiritual annihilation.”

With regard to recent concerns voiced by prominent Sephardi poskim, that the Ashkenazi community will abandon them, the rebbe stated there will be no differentiation between Ashkenazim and Sephardim in the battle “for we will take care of everyone”.

There are reports the rebbe will work to arrange a mass protest against the draft during his stay.