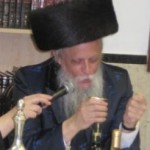 YWN-ISRAEL published a message from the Foreign Ministry, sharing Foreign Minister Avigdor Lieberman’s vision of “The meaning of Israel as the State of the Jewish People”.

Following is a response in the form of an open letter from the Bostoner Rebbe of Yerushalayim Shlita.

Foreign Minister Avigdor Lieberman in his statement said, “Eretz Israel was the birthplace of the Jewish people. Here their spiritual, religious and political identity was shaped. Here they first attained to statehood, created cultural values of national and universal significance and gave to the world the eternal Book of Books.”

These very words show how this government and its representatives are going back to the years of the Cold War when the only nations in the United Nations that did not mention G-d were the Soviet Union bloc and the State of Israel. Note that Lieberman does not mention G-d, nor can he bring himself to say the word Torah – only “the eternal Book of Books” – and we all know Torah is much more than just a book. His use of the word book, without mentioning G-d, strongly implies that it was written by man.

I agree with Lieberman that the Torah is eternal, but not because the Jewish People made it so, but rather because it was handed down to us directly from Hashem on Mount Sinai before they ever arrived in Eretz Yisroel.

Furthermore, in direct contradiction to Lieberman’s statement that “Eretz Israel was the birthplace of the Jewish people. Here their spiritual, religious and political identity was shaped” the Torah says otherwise. “I shall take you to me as a people and I shall be a G-d to you” (Shmos 6:7). As explained by Rabbeinu Bachya and the Ohr HaChaim, this becoming of a people occurred with the Giving Torah at Sinai, well before the nation entered Eretz Yisroel.

Without a belief in Torah from Sinai, Jews would not have survived the Diaspora and sadly those Jews and their children who are disconnected from Torah are being lost to the Jewish Nation today.

The Zionistic founders of Israel, even those who were non-observant, recognized that Shabbos and Torah are integral to the existence of the Jewish People as a nation. President Shimon Peres, one of the few remaining founders of the State of Israel, alluded to this yesterday when he said, “In my days in the Knesset, I would have never approved of labeling someone a criminal just for studying Torah. Additionally, Former Justice Minister Yaakov Ne’eman once quipped to me at his home, “The founders of the State thought they were creating a state of educated Maskilim (enlightened Torah scholars) and what they have developed instead is a state of Israelis who are uneducated in Judaism and ignorant in Torah.

May the Knesset members of the Jewish People come to their senses and recognize the centrality of Torah to continued Jewish existence so that the State of Israel will be able to continue to exist as a Jewish State.

With Torah Greetings from Yerushalayim