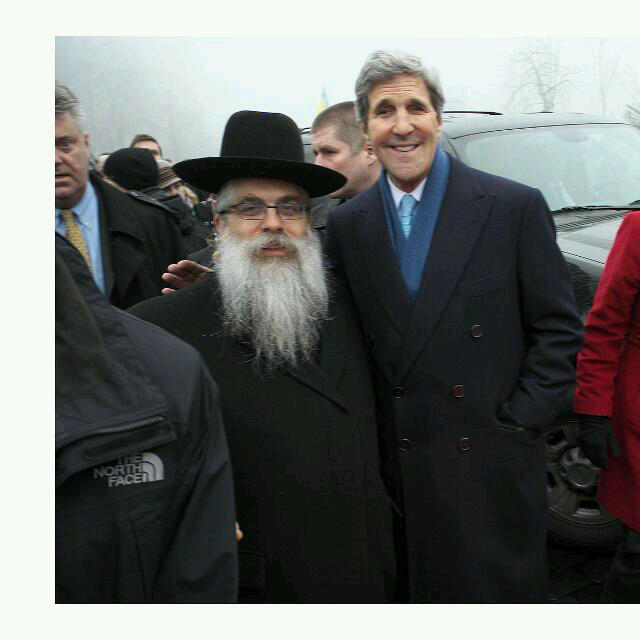 On Tuesday afternoon, Rabbi Yaakov Bleich shlita, Chief Rabbi of Ukraine, met privately with Secretary of State John Kerry, who was on a visit to Kiev to probe the political and civil climate in post-Yanukovitch Ukraine. Rabbi Bleich and Sec. Kerry discussed issues of interest to the Ukrainian nation and the large and vibrant Ukrainian Jewish community that has been hit hard by the anarchy and lawlessness that resulted due to the demonstrations and riots that prevailed for months before Yanukovitch’s ouster.

YWN had the chance to speak with Rabbi Bleich about Kerry’s visit and the challenges the Jewish community is facing.

Q: Has the tension in Ukraine quieted down since Yanukovitch left?

A: I would say the situation in Ukraine right now is hopeful, but not yet stable. On the one hand, the active violence has stopped and the revolution has ended. People feel optimistic and are hopeful for a better future. On the other hand, although the situation is no longer critical, the situation cannot be called stable. There is still quite a bit of anarchy as everything is still being slowly worked out.

People are hopeful because the revolution is over, but a new problem has arisen that has people very nervous and upset. Russia’s seizure of Crimea, in southern Ukraine, is seen by Ukrainians as an unlawful attack on Ukrainian sovereignty. It is a power-play by Russia to retain their influence in the area after Yankuvitch’s departure. The Ukrainian people see this as a threat to Ukrainian unity and are concerned that Russia won’t stop there and will try to occupy even more Ukrainian land.

Q: Who is leading Ukraine now?

A: Alexander Turchinov, a former opposition leader, is serving as Interim President.

Q: Is there any chance Yanukovitch might try to return?

A: No. He is gone and history.

Q: How does this relate to the Jewish community? Is the danger they were facing over?

A: Unfortunately, the danger is definitely not over. The anarchy that enveloped the country during the demonstrations, when police had their hands tied trying to deal with protestors, led to a state of lawlessness and chaos. Anti-Semites who previously were maintaining a low profile came out of the woodworks and used this vacuum of the rule of law to attack Jews and Jewish institutions. Jews were followed in the streets menacingly and, in the two worst cases, stabbed and beaten viciously. Now that the revolution is over, there is a hope that things can go back to normal. However, as I said, there is still quite a bit of anarchy in the streets of Ukraine and the danger still is very real. For now, at least until we see how things develop, we still very much need all of the extra security we hired to protect our community. People are still afraid to walk the streets, especially at night, and they still need protection.

Jewish life in Ukraine is continuing. The yeshivos, kollelim, schools, kiruv center, and community center are all operating and the people are living their lives as undisturbed as possible. They are all hopeful that things will return to normal soon and the community will continue to grow and thrive. However, it cannot be said that everything has stabilized and returned to the way they were before the revolution started.

Boruch Hashem, there have been no attacks since the revolution ended and we all are hoping that the worst is over. But we know that things can change very quickly and we still need to be vigilant and to keep in place the protective measures we have taken. The private security we have hired costs us $1,000 a day and we still need it. We still need the generous support of Yidden around the world to help cover this huge expense.

Q: What did the Rov discuss with Sec. Kerry?

A: Amongst other things I told him that the Jewish community is united with Ukrainian society in their wish to keep a single united Ukraine. We all feel it is crucial to keep Ukraine together and the Russian troops must leave Crimea. I told him that at this time it is very important for us to have help and support from the United States and from the international community.

I also asked him to work to move the G-7 Summit from Sochi, Russia, to Kiev.

Q: What will moving the G-7 accomplish?

A: It will be a statement to Russia and to the world that world leaders support a united Ukraine and it will be an encouragement for the Ukrainian people.

Q: Was Kerry receptive to your message?

A: Yes. He was very supportive and interested in helping the Ukrainian people.