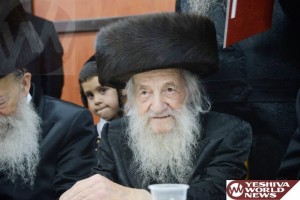 HaGaon HaRav Shmuel Halevy Wosner Shlita is joining the voice of Gedolei Yisrael Shlita calling on the tzibur in Beit Shemesh to vote on Election Day, instructing the tzibur “to vote for a chareidi mayor”.

Rav Wosner has to date refrained from making announcements pertaining to elections as his hashkafa is closer to Satmar and he is generally not involved in political matters. Analysts explain this is yet another sign of just how important participation in the mayoral election is for the chareidi community.

Rav Wosner instructed his talmid HaGaon Rav Moshe Shaul Klein to make the announcement in his name. The following announcement was released by Rav Klein. “As is known, Moreinu Bal Shevet Halevy refrains from involvement in such matters but this time he speaks of the Chilul Hashem and instructs those asking to take part in the election and vote for a chareidi Shomrei Torah mayor.”

In another exceptional move, HaGaon HaTzaddik Rav Zundel Kroizer Shlita, bal אור החמה and known by many as “The Tzaddik of Yerushalayim” released a letter calling on the tzibur to take part in the election, breaking from his usual hashkafa of distancing himself from elections and politics.

It is clear that gedolei yisrael are calling on the entire chareidi tzibur to vote in the election to ensure the victory of Mayor Rabbi Moshe Abutbul.

With the weatherman predicting stormy weather for the coming days, most believe this will work to Abutbul’s advantage as the chareidim are generally more determined and feel an achraiyus to vote while the dati leumi and secular communities may lose voters due to predicted thundershowers.