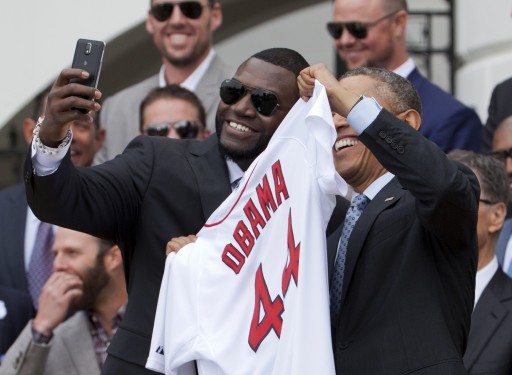 A handshake? Sure. A selfie? No way.

Some of America’s Olympic athletes say they were asked to keep their cellphones in their pockets last week when they visited the White House and met with President Barack Obama.

The request came after the selfie Boston Red Sox slugger David “Big Papi” Ortiz took with the president during his team’s visit to the White House. Many criticized it as a marketing ploy after Samsung, the maker of the phone Ortiz used, used the picture in an advertisement. Ortiz denied taking the picture with the knowledge it would be part of a promotion.

“I was a little bummed,” said Nick Goepper, a bronze medalist in slopestyle skiing. “I thought about trying to sneak one, but they were pretty adamant about it. I’m sure if they would’ve allowed it, there’d be 150 people with selfies with the president right now.”

The Olympians were visiting the White House after competing in Sochi, Russia, in February. The president typically invites high-profile sports teams and athletes to Washington to congratulate them on their performances.

The White House confirmed that the athletes were asked not to take their own photos with Obama. The White House said that in the interest of efficiency, it has been practice for years for an official White House photographer to take pictures for large groups instead. It insisted there was no outright prohibition of selfies.

It isn’t clear if similar instructions were given to the Red Sox when the team visited Washington. The Olympians’ visit came right after the Ortiz selfie ricocheted around the Internet.

The selfie shows a sunglass-clad Ortiz grinning while standing next to the president and holding up a uniform with “Obama” across the back. Ortiz tweeted the photo, and it was resent by tens of thousands of Twitter users.

The White House was not amused. Spokesman Jay Carney said at the time that the White House objects any time the president’s image is used for commercial purposes. On an appearance on CBS’s “Face the Nation” on Sunday, White House Senior Advisor Dan Pfeiffer said the White House expressed its concerns to Samsung about the ad.

“Maybe this will be the end of all selfies,” he joked.

Turns out, it was — at least for the Olympians.

Aerials skier Emily Cook said nobody barred general pictures during the general visit to the White House. But when they were in line to meet the president, they were told to keep their phones in their pockets.

“It would have been fun but I wasn’t too bummed,” Cook said. “He is the president, after all.”