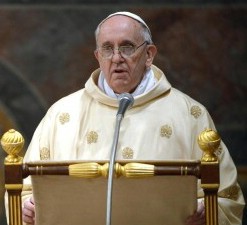 With about two weeks remaining until Pope Francis arrives in Jerusalem, the Ministry of Education has decided it must act by advancing Christian content in the public school curriculum under the banner “Exposing students to the lights, not only shadows in regard to relations between the Christian world and Jews”.

Ramat Gan Chief Rabbi and noted posek HaGaon HaRav Yaakov Ariel says “[Do you want us] to tell the youth in Israel that Christianity has changed its character? This is an inexcusable injustice.” He adds “Christianity has been hostile to Jews forever. Millions of Jews were slaughtered by Christians and one cannot say the attitude has changed. Merely 65 years ago the pope opposed the creation of the state because they claim Christianity replaces Judaism and the State of Israel contradicts the Christian faith”.

The Education Committee of the Knesset feels introducing the Christian content into the curriculum is an appropriate act towards marking 50 years since the death of the pope who was an ally of Israel and during WWII acted as a Vatican emissary in Turkey. “The Christian theology remains anti-Jewish and anti-Israeli. Christianity cannot recognize the return of the Jewish People to its land. For this contradicts their thesis. According to them, Am Yisrael suffers because it did not accept the man. This confusion being presented to the children is very dangerous for children must be taught of the dangers of missionaries. Christians believe that one day will convert and we must stop the Education Committee and its deviant plan”.

HaGaon HaRav Shlomo Aviner Shlita adds that while the pope did assist many Jews during the Holocaust, he remains adamantly opposed as well. He explains that it is nice and comforting to declare the pope a “righteous gentile” in Yad Vashem but we must see what he did nonetheless. His actions were his own and not in the name of the church. Rav Aviner explains he did what he did because he is a person and not because he is a Christian. “Christianity is not our friend but ontological and hostile. Catholicism wants us to disappear from the face of the earth when that time comes and therefore we recommend to diminish studies [on Catholicism] and increase studies in Judaism, not to seek poisoned bread but rather to commit to keeping the Torah which was given to us by Moshe before Bnei Yisrael”.