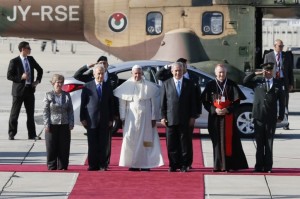 The papal visit to Israel angers many Yidden considering the history of the Church and the Jewish people. Adding fuel to the flames of dispute is the rumored backroom deal signed between Israel and the Vatican that would turn over the upper area of Kever Dovid HaMelech to the Church.

Rosh Yeshivas Diaspora Yeshiva Rabbi Yitzchak Goldstein Shlita, whose yeshiva is a neighbor to the kever, spoke with Kikar Shabbos, using the forum to express criticism against people using violence to protest the alleged deal. “I condemn the rioting which does not help but harms the situation. This gives grounds to explain why Yeshu was correct and they obscure the central problem, the injustice and breaking the status quo that exists for over 100 years” Rabbi Goldstein stated.

Regarding reports that a portion of the kever will be given to the church, Rabbi Goldstein adds “We feel the pope is doing an injustice. A status quo exists from the time of the British setting policy that everyone can pray on the upper floor without holding any religious ceremonies. When one group or another holds religious ceremonies, it in essence acquires ownership for itself above the other groups and this is an injustice”.

The rav feels the human aspect and justice should be highlighted, for they are the flagship of the Church, which calls for this throughout the world. The rabbi quotes the Rambam in Hilchos Avoda Zara, stating permitting the church a foothold would be a disgrace to Kodshei Yisrael. He added the pope discriminates against certain populations and feels from our perspective; the main point of the conflict is the injustice regarding the status quo that is being violated here. The rabbi feels the world must understand that taking from one group to give to another is injustice.

The rabbi concludes that from a Halachic perspective, there is no problem with the pope visiting, pointing out that we accept everyone as they are, even an idol worshiper. “We cannot arrest anyone just as we do not wish to be arrested in other places. We are still in galus. There is no Halachic prohibition for a non-Jew to visit but there is a prohibition regarding renting or selling to one who believes in idolatry…” the rav added.