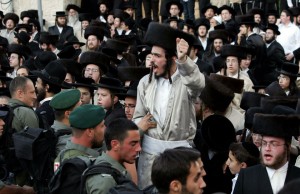 Tens of chareidim took part in a protest in Yerushalayim against growing chilul Shabbos in the city. They tried blocking HaNevi’im Street at the corner of Shivtei Yisrael Street but were prevented from doing so by police.

Police confirm that two people were arrested. There were no reports of injuries.