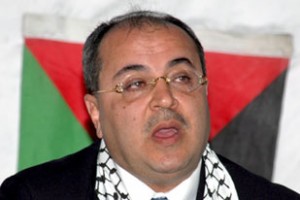 A request from MK (Ra’am-Ta’al) Dr. Ahmed Tibi on behalf of the Knesset employee who posted his support for terrorists was rejected by Knesset Speaker Yuli Edelstein.

The employee used his Facebook page to write “320 Palestinian administrative prisoners are hunger-striking are viewed as captives of Israel. They must be charged with crimes or released immediately. That you sit in an office and wear a suit, calling yourself president or a leader does not mean you aren’t a terrorist”.

When his firing was announced, it was also pointed out that this was not his first infraction and he was warned in the past that a repeat of this offense would result in his dismissal.

Tibi however was not basing his request on the content of the employee’s opinion, but the fact that “many Knesset employees have posted their own personal opinion in the past and they have not been fired”. Dr. Tibi cited this includes right-wing extremist views, but no one seemed bothered. The Arab MK feels the employee is being discriminated against because he is Arab.

Edelstein explained that the rules state specifically that an employee of Knesset may not publicize his/her personal political views, backing the decision to fire the employee.