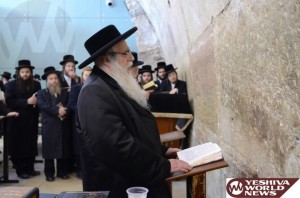 The Sanzer Rebbe Shlita was among the many being menachem aveil at the home of the families of the kedoshim HY”D. The rebbe visited with the Yifrach family, the parents of Eyal HY”D. The rebbe explained “אין כל בריה יכולה לעמוד במעלתם ובמחיצתם של קדושים”.

The rebbe spoke with Mr. Yifrach explaining the level of the boys who dies Al Kiddush Hashem and the mission, they the parents were selected to fulfill. He explained “our existence as the Jewish People is dependent on our steadfast emunah in HKBH”, praising their actions during recent weeks.

When the rebbe finished being menachem aveil, he got up and went to the women’s section and spoke with Mrs. Yifrach, explaining to her that she and the other women were MeKadesh Shem Shomayim around the world.

As the search for the boys continued, the rebbe was mispallel for them as the Kosel.

In other Sanzer news, Sunday night 9 Tammuz 5774 marks the 20th anniversary of the Sanzer Rebbe ZT”L ZY”A, the Shefa Chaim of Sanz. Thousands are expected to be visiting the kever which is located in Kiryat Sanz section of the beis chaim in Netanya. In Mosdos Sanz around the world, yahrzeit seudos will be held. The ohel around the kever will remain open the entire day Monday, 9 Tammuz.

The rebbe shlita is expected on Monday as well. Police are stepping up security in the area in anticipation of many many mispallalim. There will be special limudim in all yeshivos affiliated with the chassidus on the yahrzeit.