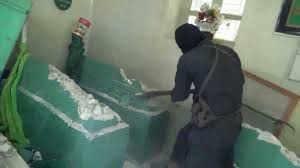 This is the shocking moment ISIS militants took sledgehammers to Iraqi tombstones  – smashing them to pieces.

The rebels, who are members of the Islamic State terror group, were filmed attacking centuries-old graves in the north-west city of Mosul in Ninevah province.

Donning balaclavas and black coats, they swung sledgehammers into the tombs, causing pieces of dust and stone to fly through the air.

One of the devastated tombstones belonged to the Prophet Jonah (Younis in Arabic) and was revered by Muslims and Christians alike, according to Iraqi authorities.

The prophet, who is the central figure in the s Book of Yonah, is best known for being swallowed by a fish or a whale, depending on translation.

The attack is the latest in the ISIS’s violent rampage across Iraq.

Earlier this week, a series of images emerged showing the destruction of almost a dozen Shia and Sunni religious shrines in Mosul, Iraq’s second largest city, and the town of Tal Afar, which is also currently under ISIS control.