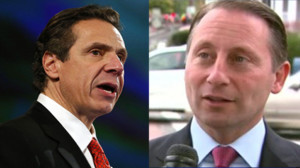 Astorino’s spokeswoman says Monday that the contributions came from more than 4,000 donors. After campaign expenses were deducted, Astorino reports having $2.4 million on hand.

Some $600,000 of Astorino’s money was transferred from the campaign account he used for his current position, the Westchester County executive.

Spokeswoman Jessica Proud says Astorino is pleased with the support and expects to raise additional resources as voters learn more about his campaign.

Tuesday is the deadline for campaigns to file new finance reports.

Cuomo remains well ahead in polls and in fundraising, with $33 million in his account as of January. Cuomo has not yet released his most recent numbers.