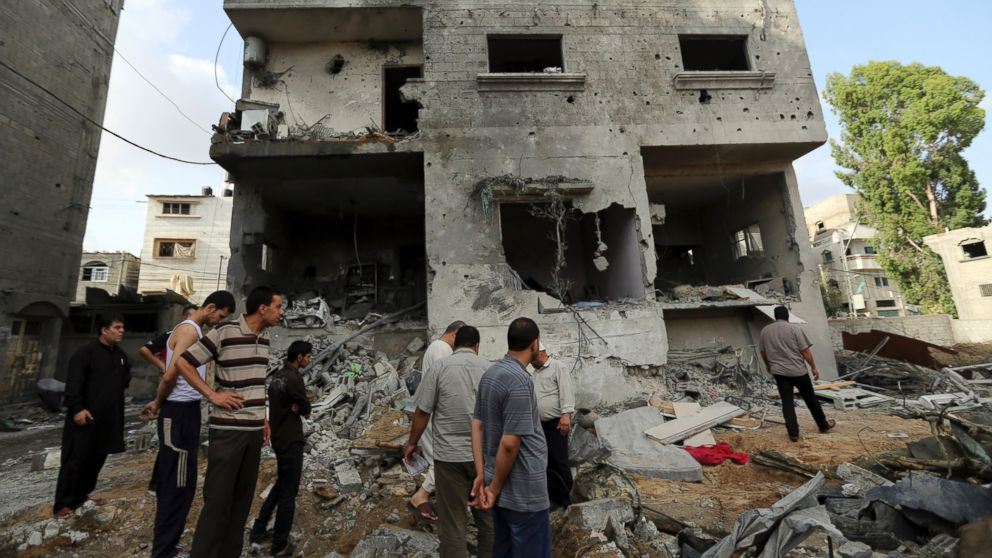 23:22: Ynet quotes an unnamed source within Israel’s Cabinet, which says that the ceasefire proposal was serious.

22:48: Red alerts are no ringing in Ashkelon and Eshkol regional Council areas.

22:42: A rocket was fired from Lebanon into Northern Israel a few moments ago. No injuries are being reported.

22:40: Gaza news agencies report that arch-terrorist Hamas’s Ismail Haniya is scheduled to speak shortly. This is monumental as he has been hiding since the operation has started.

20:48: Washington warns Israel against launching a ground assault against Gaza.

20:36: So far today, 85 rockets fired from Gaza hit Israel; an additional 15 rockets were intercepted by the Iron Dome.

19:37: US State Department officials have arrived in Egypt to lay the groundwork for Secretary of State John Kerry, who is set to arrive on Tuesday, 17 Tammuz. America is likely to begin pressuring Egyptian President Abdel Fattah el-Sisi to act as a go-between to negotiate with Israel and Hamas, hoping to set a ceasefire agreement in place.

19:27: A rocket exploded in an open area in Yerucham. No injuries reported.

19:20: A spontaneous protest in Kikar Tziyon in Yerushalayim amid continuing rocket attacks in southern Israel. Participants shouting “death to Arabs”.

19:18: Channel 10 News: Hamas vows to take revenge against all residents who left their homes following IDF instructions to do so.

19:17: Defense Minister Ya’alon: It is important to end the operation on our terms.

19:14: IDF artillery fire being directed over the border following the rocket fire into the Golan Heights.

19:13: The IAF is pounding terrorists in Gaza as rocket attacks into Israel continue.

19:12: Two girls ages 11 and 13 sustained moderate to serious injuries in the last round of rocket fire near Omer, which is near Beersheva. They are in Soroka Medical Center.

19:10: Red alerts ringing in Dimona right now. This is the city where the Israeli nuclear reactor is located in.

19:04: Sirens sounding in Yerucham and Dimona.

19:03: The IDF says 2 rockets landed in the Golan earlier. No injuries reported.

19:01: An elderly man has been rushed to the hospital by MDA in Be’er Sheva after he fell while running to a shelter. his injuries are reportedly serious.

18:54: A 12-year-old girl was injured in a rocket strike in Be’er Sheva. She was rushed to the hospital by her parents. Her condition and extent of her injuries is unknown.

18:52: The IAF has just destroyed two rocket launchers who have been firing rockets at Sderot.

18:45: The IDF says that they have destroyed around 3000 rockets in airstrikes in the Gaza Strip. They add that many of the launching pits have not been destroyed because many innocent civilians will be killed in those strikes. It is a know fact that Hamas uses civilians as human shields in their terror campaigns.

18:41: Ynet quotes a senior IDF official, which says that Hamas is desperate for a ceasefire.

18:39: The IAF just conducted a targeting killing, as a missile was fired at a terrorist riding a motorcycle on a Gaza street. Multiple injuries reported.

18:38: Large explosions are being reported in the Gaza Strip, as the IAF takes out terror targets.

18:36: A rocket fired from Syria fell in an open area in El Rom in the Golan Heights.

18:30: A rocket was fired into Northern Israel a few moments ago from Syria.

18:06: Rocket lands in Yishuv in Northern Golan heights. Bichasdei Hashem there are no injuries.

18:03: Two rockets land in open areas outside of Be’er Sheva.

18:01: Shrapnel from Rocket landed in Bnei Brak. There are no injuries reported, and the police are on the scene.

16:17: A number of rockets exploded in open areas in the S’dot HaNegev Council.

16:09: Sirens minutes ago in Eshkol Council once again.

16:06: Damage to vehicles and at least one home in the last round of rocket fire to Gaza border communities. Damaged vehicles in Sderot.

15:37: Sirens sounding in Ein HaShloshah in the Gaza border area at this time.

15:34: The Israeli who was wounded in the southern Israel mortar shell attack earlier is an IDF soldier.

15:00: A storage facility in the Shar HaNegev Council was hit by an incoming rocket. A fire broke out as a result

One person is reportedly injured in a mortar rocket attack near Kissufim, close to the Gaza border. The victim is being transported to the hospital. He is said to be in light-to-moderate condition.

There are reports of damage to communities in the Shar HaNegev and Eshkol Regional Councils as a result of recent attacks. Over 60 rockets landed in those areas since the morning.

14:48: The Iron Dome has intercepted rockets. B’chasdei Hashem there are no immediate reports of fatalities or injuries in the last wave of terrorist rocket fire.

14:46: Sirens sounding in the Kiryat Malachi and Ashkelon areas.

14:44: Police report a rocket hit a storage facility in Shar HaNegev district resulting in a blaze.

14:24: First reports from Gan Yavne – Iron Dome did not fire. One rocket landed in the community. No immediate reports of injuries. EMS and police are heading to the impact location.

In the Eshkol Regional Council there are reports of damage in one community.

14:17: Sirens sounding in Ashdod and Gan Yavne. Over 50 rockets to the Ashdod area since the AM.

14:11: Sirens sounding in Sderot, Kissufim and the area communities.

13:49: Lebanese media is reporting the two rocket launchers used to fire into northern Israel during the night have been found.

13:46: In the last Ashdod attack, a katyusha rocket caused significant damage to a home. B’chasdei Hashem there were no fatalities. The rocket carries about 20kg of explosives.

12:55: Sirens sounded again in Ashkelon as well as throughout Gaza border communities.

12:47: At least 35 rockets have been fired to the Ashdod and Ashkelon areas in the past hours.

12:44: An 8-year-old boy is being treated for extremely light shrapnel injuries in Ashdod. A rocket landed near a home and destroyed a vehicle after making a direct hit.

The boy was running for cover but did not make it in time. He was injured in a hand.

12:29: Rockets have been launched at Ashdod and or Ashkelon about every 20 minutes since the morning hours.

12:26: Another wave in Ashdod and Ashkelon as sirens are sounding again.

12:23: Sirens sounding in Ashdod and the Ashkelon area.

11:38: Sirens in Ashkelon and the surrounding areas.

11:19: The Iron Dome has once again intercepted rockets heading for a populated area. Ashkelon has had numerous sirens already today.

11:16: Sirens sounding in Ashkelon and the surrounding area along with the Gaza border communities.

10:47: Two rockets intercepted over Kiryat Malachi and neither of Asheklon.

10:07: The Ashkelon Coast area has been declared a ‘closed military zone’. Only residents showing ID cards to prove their address will be permitted into the area.

09:30: Arab violence against soldiers in Hebron during the night. One was shot dead and other injured. No injuries to IDF soldiers.

09:01: B’chasdei Hashem there are no fatalities, injuries or reports of damage in rocket attacks this morning.

08:56: Once again sirens in the Eshkol Council a few minutes ago.

08:29: Over the last few minutes sirens sounded in the Ashkelon Coast Council, Ashdod, Zikim and the Eshkol Regional Council. Multiple sirens in some areas.

08:10: Sirens sounding in Ashkelon and Zikim.

08:07: There are no injuries or damage reported in earlier rocket attacks.

07:48: Sirens sounding in the Ashkelon district.

07:36: A rocket exploded in an open area in the Eshkol Region.

07:35: The pilotless aircraft activated the sirens. It was downed by a Patriot missile fired from the center of the country, Channel 10 now reporting.

07:31: A Hamas pilotless aircraft appears to have been neutralized over Ashdod earlier today, Channel 10 News reports. No additional details are being released by the IDF at this time.

07:27: Walla News reports the IDF during the night eliminated 11 Gazan terrorists including 6 from Islamic Jihad and 2 from Hamas. In the past 24 hours the IDF targeted 204 sites including 28 underground launchers 18 suspected tunnel entrances, and eleven military bases. Since the start of the operation, the IDF targeted 1,474 terror sites.

07:23: Sirens sounding in the Beersheva district.

07:13: Sirens sounding in the Merchavim area.

07:01: Rockets fired over recent days have been homemade variety manufactured in Gaza and not by Syria. This includes the long range rockets that reached Haifa.

06:54: The rocket fired at Ashdod was intercepted by the Iron Dome.

06:36: 19 rockets landed in the Eshkol Regional Council since midnight.

03:29: Since the start of Operation Protective Edge, over 940 rockets have been fired towards Israel. Of them 740 hit Israel and nearly 187 have been intercepted by the Iron Dome missile defense system. The IDF has targeted over 1,425 terror targets, with both naval and aerial capabilities.

00:40: At least one rocket explodes in open area in Northern Israel. No injuries reported.

00:15: The security cabinet convened Sunday evening and decided to continue to mobilize troops while persisting in carrying out aerial attacks. There was no decision if troops will begin entering by ground. At this time, the aerial attacks to silence the terror in Gaza will continue.

00:07: Two Charedim were attacked by Palestinian thugs near Jerusalem’s Old City, by Herod’s Gate. Police are searching for the attackers. They were treated by MDA Paramedics.

UPDATE: 12:00AM IL: With the clock striking midnight on Sunday evening / Monday morning, Israel has now entered “Day 7 of Operation Protective Edge”. Stay with YWN as we continue our non-stop 24 hour news coverage – updated just seconds after an event occurs.