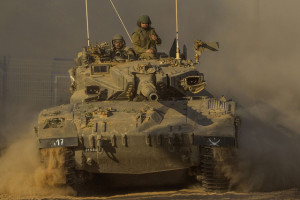 Gantz said, “This is an operation which proves our combined work, every person sat around this table is a full partner to this ongoing battle. We are pained by the losses but have no doubt that we are in the right direction to achieve the aims set by the political leadership and we are committed to continuing in our mission to bring quiet and security to the citizens of Israel. Mr. President, you planted the flowers which we enjoy today and you worked tirelessly for the people of Israel. On behalf of the IDF, its officers and soldiers, I salute you.”

Defense Minister Ya’alon added, “The soldiers and officers who we are meeting are professional and committed. Our forces are fighting an enemy which disappears between civilians. Mr. President, you are completing your term but I know you will never retire your sense of mission.

Following the briefing President Peres said, “Supporting the bereaved families at this time gives me strength. We are meeting a young generation, unfortunately after they fell in battle and learning how wonderful they are. I don’t remember a period of such solidarity between citizens and soldiers, between soldiers and parents. This is our victory of humanity. I am concluding my service but beginning my reserve duty. From my experience I can say that I don’t recall a military command that instilled such faith in the people. I leave here with great pride. As a citizen of Israel I thank you from the depths of my heart.”