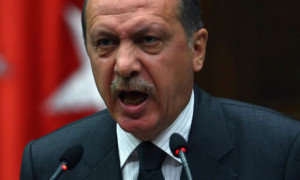 After the Marvi Marmara terrorist vessel made its voyage to Israel to break the marine blockade of Gaza, the IHH is preparing for a repeat performance. Once again the vessel, the ‘Freedom Two’, is being portrayed as a humanitarian vessel. Yisrael Hayom reports that the Turkish government has given the green light to send the vessel to Gaza, once again announcing it will break the IDF marine blockade on Gaza to bring humanitarian aid to Gazans.

However, unlike the Marvi Marmara which was not escorted, the Freedom Two will be escorted by Turkish war ships, a move that if actualized may lead to a military confrontation with Israel. Turkish Prime Minister Recep Tayyip Erdogan has announced “Israel’s actions are worse than Hitler” in his description of Operation Protective Edge, the IDF counter-terrorism operation in Gaza.

No timetable is being announced for the Freedom Two’s departure from Turkey.