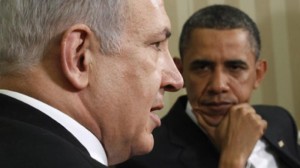 An alleged conversation between President Obama and PM Netanyahu has been leaked, and is causing quite a stir.

According to Channel 1 in Israel which leaked the conversation, the phone call was between President Obama and PM Netanyahu where the President was demanding an immediate ceasefire to IDF operations in Gaza. The conversation, if true, would show a hostile Obama towards Netanyahu and the State Of Israel.

Immediately after the report was published, numerous statements were released.

“Well, let me first say, obviously – and I know these reports just came out – the reports of a leaked transcript. We don’t have any confirmation of that at this point in time. Naturally, if that’s true that would be a severe violation of a private conversation – a private diplomatic discussion.”

Meanwhile, the Whitehouse said that “neither the reports nor the alleged transcript bear any resemblance to reality”. The Whitehouse added that it is “shocking & disappointing that someone would sink to misrepresenting (a) private (phone) call between POTUS & PM in fabrications to Israeli press”.

Shortly after, the PMO said that “We have seen these reports, and neither the reports nor the alleged transcript bear any resemblance to reality. It’s shocking and disappointing that someone would sink to misrepresenting a private conversation between the President and the Prime Minister in fabrications to the Israeli press,” the PMO says.

But despite the statements by the Whitehouse and the PMO, the reporter at Channel 1 is standing by his story, and says the transcripts are authentic and were leaked to him by a senior American official.

The following is via the Times Of Israel:

Barack Obama (BO): I demand that Israel agrees to an immediate, unilateral ceasefire and halt all offensive activities, in particular airstrikes.

Benjamin Netanyahu (BN): And what will Israel receive in exchange for a ceasefire?

BO: I believe that Hamas will cease its rocket fire — silence will be met with silence.

BO: I repeat and expect Israel to stop all its military activities unilaterally. The pictures of destruction in Gaza distance the world from Israel’s position.

BO: Within a week of the end of Israel’s military activities, Qatar and Turkey will begin negotiations with Hamas based on the 2012 understandings, including Israel’s commitment to removing the siege and restrictions on Gaza.

BN: Qatar and Turkey are the biggest supporters of Hamas. It’s impossible to rely on them to be fair mediators.

BO: I trust Qatar and Turkey. Israel is not in the position that it can choose its mediators.

BN: I protest because Hamas can continue to launch rockets and use tunnels for terror attacks –

BO: (interrupting Netanyahu) The ball’s in Israel’s court, and it must end all its military activities.