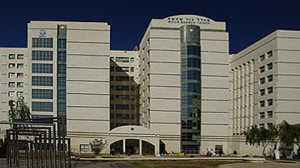 The new underground facility is underground and bomb proof and offers the best medicine has to offer. Each patient has its own room, unlike standard ERs in which patients are separated by a curtain. This officials explain adds a measure of patient privacy.

There is also a trauma center capable of addressing numerous patients simultaneously.