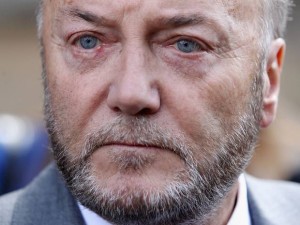 The following is via the BBC:

Calls by George Galloway for Bradford to be “declared an Israel-free zone” are being investigated by West Yorkshire Police.

Officers said two complaints had been made about a speech he made urging the city to reject all Israeli goods, services, academics and even tourists.

A spokesman for the Bradford West MP said he stood by his remarks.

Conservative MP Robert Halfon dismissed them as an “ill-considered rant that will cause great offence to many”.

But David Ward, Lib Dem MP for neighbouring Bradford East, said “Israel-free zone” was a “nice sound bite” but any boycott had to be UK-wide.

Mr Galloway’s comments, made at a packed meeting of Respect activists in Leeds on Saturday, were posted on YouTube and prompted a storm of comment on Twitter.

The Respect MP told the meeting: “We have declared Bradford an Israel-free zone.

“We don’t even want any Israeli tourists to come to Bradford even if any of them had thought of doing so.

“We reject this illegal, barbarous, savage state that calls itself Israel – and you have to do the same.”

Mr Galloway’s spokesman Ron McKay said the remarks were an extension of a boycott and direct action movement against supermarkets and companies supporting Israel.

“George stands by the comments – he thinks they are quite reasonable,” said Mr McKay.

“The reason he made them is because there’s mass carnage and mass slaughter going on against the people of Gaza.

“Direct action helped in the struggle against apartheid.”

But Mr Halfon, MP for Harlow and a former political director of the Conservative Friends of Israel, described Mr Galloway’s remarks as “shocking”.

“This ill-considered rant will cause great offence to many,” he said.

“Fortunately, I suspect most Bradford citizens are like British people as a whole: tolerant and decent – and will ignore Mr Galloway’s demands, treating them with the contempt they deserve.

“They know that despite the tragedy in Gaza, that Israel is the only democracy in the Middle East, that both ordinary Palestinians and Israelis have suffered – not least because of the 13,000 rockets fired on to Israel by Hamas and Islamic Jihad, since the Israeli unilateral withdrawal from Gaza in 2005.”

“Israelis come to Bradford – people from Bradford go to Israel – there are many people I know in Bradford who have relatives in Israel,” he told BBC Radio Leeds.

“And I think Mr Galloway’s comments are completely off the wall and nothing to do with the reality of today’s life in Bradford.”

‘National movement’
Jonathan Arkush, vice president of the Board of Deputies of British Jews, described the remarks as “odious”.

“He doesn’t differentiate between an adult or child – most people are apolitical. This man is so intolerant he can’t bear to have someone with an opposing view in his town – how ridiculous is this.”

But David Ward – who has started a petition calling for a boycott of Israel – said Mr Galloway did not go far enough.

He said he wanted to see something like the anti-apartheid movement, with sporting, cultural and academic boycotts, as well economic sanctions to keep up pressure on Israel, which he said had continuously flouted UN resolutions.

“What’s the point of that? It has to be a national movement.”

Mr Ward was suspended from the Lib Dem parliamentary party in July 2013 and had the whip withdrawn for three months over comments he made about Israel.

He was later reinstated but is now facing Lib Dem disciplinary proceedings over a tweet he sent last month, which said: “the big question is – if I lived in #Gaza would I fire a rocket? – probably yes”. He apologised for the comment, which was condemned by his party.

A West Yorkshire Police spokesperson said: “We have received two separate complaints about comments attributed to George Galloway MP during a speech he gave at a public meeting in Leeds on 2nd August 2014. We are currently investigating the complaints.”

Mr Galloway, who took the Bradford West seat from Labour following a by-election in 2012, is a staunch campaigner and supporter of the Palestinian side of the Israeli-Palestinian conflict.

He co-founded the anti-war Respect Party in 2004 after being expelled by Labour because of comments he made as part of his opposition to the Iraq war.