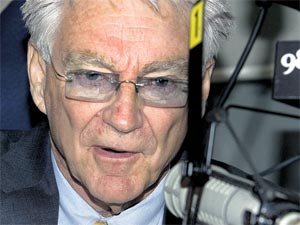 In the darker corners of the Internet, it is easy to find racists and conspiracy theorists fuming about deep-pocketed Jews controlling the world.

But a Jewish group has sounded the alarm after a well-known Quebec media personality used his newspaper column and an appearance on a Montreal radio show to spout such anti-Semitic opinions.

Gilles Proulx was invited onto Montreal’s Radio X last Friday after writing a column in the Journal de Montréal on the Israel-Hamas conflict. “No need to be an expert to say that Israel could make Washington, Paris or Ottawa bend, knowing in advance that its diaspora, well established, will make any government submit!” he wrote in the Journal.

Speaking to Radio X, he elaborated on his thinking, suggesting Jews historically provoke hate and persecution. “The diaspora is scattered around the world, where they take economic control, provoke the hatred of local nations, whether it is in Spain, for example, with the Inquisition, or again later with Adolf Hitler,” he said.

Later he added: “The diasporas are so powerful in Paris, New York, Toronto or in Ottawa or Montreal, that they can manipulate the government through their opinions, their threats, their pressure, making it a marionette.” The show’s host never challenged Mr. Proulx’s remarks.