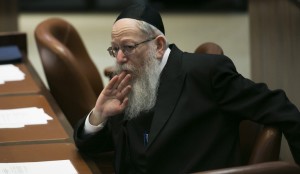 Speaking to Moti Lavi on Kol Berama Radio on Thursday morning, MK Yaakov Litzman explained the petition to the Supreme Court is not against Rabbi Aryeh Stern but it is aimed at postponing the election for new chief rabbis of the capital.

Litzman admitted that the petition is also designed to delay the election until Rabbi Stern turns 70, and he will then be too old to run for the post. However he stressed the petition seeks to postpone the election for other reasons too.

When asked to comment on the candidacy of Rabbi Mordecai Toledano as a candidate for the Sephardi Chief Rabbi post, Litzman stated he is worthy of such a post. He stressed that at present they are undecided on who to support until the list of candidates is finalized. When asked about Rabbi Shlomo Amar Shlita, Litzman stated he will address any and all the candidates when they officially enter the race but he will not comment on any candidate when the situation is theoretical.

Rabbi Toledano, a son-in-law of Maran HaGaon HaRav Ovadia Yosef ZT”L released a letter signed by Rabbi Shalom Cohen Shlita. Shas followed with an announcement that it has yet to decide which candidate to back. HaGaon HaRav Cohen’s staff on Thursday morning 16 Elul released a message that Rabbi Cohen has never endorsed Rabbi Toledano’s candidacy.

Kol Berama: What is the situation regarding entering the coalition? MK Gafne indicated that without Yesh Atid he believes the rabbonim would agree to enter the coalition and supports such a move.

Litzman: First of all the decision is that of the rabbonim. That said, because of what was done to us and because of the Zero VAT Law and much else, we are not looking to enter into any coalition. We are moving towards elections. I do not favor enter the coalition and we want early elections. I will not recommend entering any coalition at present.