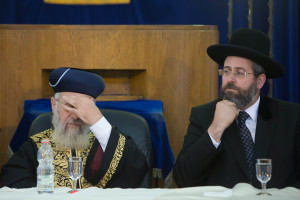 Rabbi Efrati said the Chief Rabbinate is the nation’s mezuzah to protect the home and it alone must be responsible for maintaining matters of Yiddishkheit. “Klall Yisrael must turn to this holy institution, which was established by Rav Kook ZT”L, first and foremost the giyur”.

Rav Nebenzahl insisted the Chief Rabbinate alone can control giyur for it must be done in accordance to Halacha and this cannot be accomplished by placing it in the hands of civil service rabbonim around the country.

Rabbi Kook added that rabbonim from the Diaspora have already indicated they will no longer automatically accept converts from Israel is the bill is passed to law. Rabbi Kook was referring to a delegation of London rabbonim and dayanim meeting with Chief Rabbi Lau to express their concerns over the Stern bill. Rabbi Kook added the Chief Rabbinate will not accept the giyur and this reality is true among many rabbonim from the dati leumi camp. He warns that such giyur would split the nation while opening the door for the entry of the Reform Movement, citing some MKs have already stated this openly.

Rabbi Yosef added “There is a rabbi of a certain city who began the entire matter and for whom the bill was sponsored”, which those present understood to be a reference to the head of Tzohar Rabbonim Rabbi David Stav. “He argued with me for an hour as he wishes to convert tens of thousands of children whose parents are gentiles. I asked him how such children can be converted if they live in a Christian home, eat treif, are mechalel Shabbos and have stated on numerous occasions that the attend church. They are being raised to be goyim in all aspects of their life. This is giyur? What a scam but he insisted [it was okay]”.

Rav Yitzchak Yosef added that even those among these children that have been accepted refers to unique b’dieved situations and this cannot clear the way for basing policy on exceptions. Rabbi Yosef warns the rabbonim favoring the bill will not only permit civil service city rabbonim to sit on batei din, but they will include rabbis who have a hashkafa of leniency, and this will chas v’sholom open the door to permit thousands of goyim to enter the camp. He warns they will establish batei din composed of rabbonim who will act contrary to halacha and the traditions of Am Yisrael.