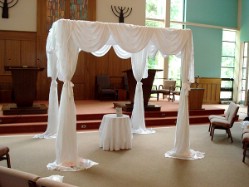 What would you say if you were informed that “treif” has been served at thousands of Orthodox Jewish weddings for the past decade and more?
It is likely that you would be pretty upset.

Yet, if you have gone to a religious Jewish wedding recently, it is highly probable that you consumed this Tarfus. What is perhaps more scandalous is that numerous people are aware of it. And until now, most of those people have done nothing about it. Sadly, if the either the catering hall, the Chasan, the Kallah, any parent, or the Rosh Yeshiva would want to – it can be stopped almost instantly.

The underlying issue is the noise-induced hearing loss brought about by the excessively earsplitting music. Recently, this author measured the sound of the band at a wedding with a decibel meter. The noise levels were not just at the danger range – but far, far, past it.

The Tarfus being referred to is a negation of three different Mitzvos. There is the first Mitzvah of “veNishmartem me’od b’nafshosaichem (Dvarim 4:9) – the Mitzvah of protecting our health and well-being. The verse later on (Dvarim 4:15), “Rak hishamer lecha” is understood by most Poskim to actually comprise a second Mitzvah (See Rav Chaim Kanievsky Shlita Shaar HaTeshuvos #25) – to take special care. There is also a third Mitzvah, “V’Chai Bahem – And you shall live by them” (VaYikra 18:5).

Lest the reader think that the danger is exaggerated in this article, we must first understand how it is that we hear anything in the first place.

The sound waves enter our outer ear and bounce through our ear canal, ultimately hitting the ear drum.

The eardrum vibrates from these sound waves and channels the vibrations to three crucial bones in the middle ear. The bones are called the malleus, the incus, and the stapes.

These bones in the middle ear change the sound vibrations from air vibrations to fluid vibrations. This is done in the snail-shaped cochlea of the inner ear. The cochlea is filled with fluid. The cochlea is divided into an upper and lower section by an elastic partition called the basilar membrane. This membrane has hair cells on it which are actually sensory cells. These hair cells move up and down as they ride the fluid wave. The hair cells have even smaller hairs on top of them called stereocilia. When they hit the top ceiling they bend and open up a pore in the cell. Chemicals then rush into the hair cell which causes an electrical signal. This signal is carried by the auditory nerve into the brain. The brain understands the signal as a familiar sound.

Loud noises over a certain decibel reading can either damage or destroy these hair cells. Human hair cells never grow back. That number can vary, but it is clear that damage is done above the 85 decibel mark. Often the damage does not show until later on in life, but is a clear and present danger.

According to the National Institute of Health, “Sounds of less than 75 decibels, even after long exposure, are unlikely to cause hearing loss. However, long or repeated exposure to sounds at or above 85 decibels can cause hearing loss. The louder the sound, the shorter the amount of time it takes for noise induced hearing loss to happen.

Noise induced hearing loss can be immediate or it can take a long time to be noticeable. It can be temporary or permanent, and it can affect one ear or both ears. Even if you can’t tell that you are damaging your hearing, you could have trouble hearing in the future, such as not being able to understand other people when they talk, especially on the phone or in a noisy room.”

How many decibels are typical sounds? A refrigerator hums at 45 decibels. Human beings speak at 60 decibels. A Rav can speak at about 80 decibels. Manhattan city traffic can hit 90 decibels. A revving motorcycle can hit 100 decibels. A siren screeches at 120 decibels. An Uzi submachine gun is about 140 decibels. So what did the band hit?

Near the band at the actual wedding, my unit measured at 142. That’s right, above a submachine gun. Deafening. At the tables, where you could not hear regular normal conversation, it was above 110. Now it could be that my unit was not calibrated well, but after having purchased another unit and measuring lower items to each other, it seems that the calibration was accurate.

At a wedding, the distance from the band and the length of time that one is exposed to the ear-splitting music are important factors in assessing the long term damage done. In the past few months, I have not seen one player in any wedding band that did not wear ear plugs.

It is true that we should let young people have their fun, and loud music is often synonymous with fun. But there are limitations. We should make every effort to reduce the noise level to tolerable levels that do not damage the ears of Klal Yisroel. It is this author’s opinion that every Chassan, Kallah, parent and caterer should instruct the band to make sure that the noise level does not exceed 85 decibels at the tables. We should actually measure this to ensure compliance. What rationale is there in the world to harm the hearing of our guests so permanently?

The Ben Ish Chai writes that a person should make every effort to ensure the general safety of both himself and those around him (Parshas Pinchas year cycle #2). The Turei Zahav in his commentary to Choshain Mishpat (427:10) cites a Midrash on Shir HaShirim that when one does this and protects himself from dangers and damage not only is he protected, but he receives extraordinary credit for the Mitzvah too.