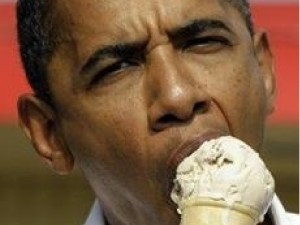 President Barack Obama says history and facts are on the side of Democrats this election season.

Obama is raising money for the Democratic Party at a pair of fundraisers in New York. It’s part of a weeklong fundraising push by Obama ahead of the Nov. 4 elections.

Obama says Republicans think the U.S. should allow prosperity to stay all at the top. He says they want to eliminate regulations on banks, companies and polluters in hopes of boosting the economy.

About 250 donors paid $1,000 each to see Obama speak at a ritzy restaurant in Manhattan.