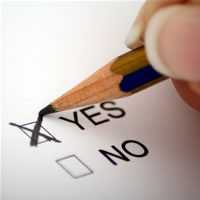 Someone has to win.

Most Americans say they dislike both the Republicans and the Democrats, but a new Associated Press-GfK poll finds more of them now say they would like the GOP to control Congress over the Democrats. That’s in part because, on major issues including the economy and protecting the country, Republicans have gained an edge as the more trusted party among likely voters. But one major issue making headlines recently does not appear to be making much difference in how Americans are viewing the election, a new Associated Press-GfK poll shows.

Five things to know from the AP-GfK poll: Four that are shaping the contest, and one that likely won’t.

Most Americans remain deeply concerned about the direction of the economy, and the GOP is in a position to take advantage of that concern. Sixty-one percent of Americans describe the economy as poor, while only 38 percent say that it is good. Nine in 10 likely voters call the economy an extremely or very important issue, topping all other issues tested in the poll by more than 10 percentage points.

The new poll shows the two parties about even on which one adults trust to handle the economy, but among those most likely to cast a ballot in November, Republicans have the edge, 39 percent to 31 percent. The Republican advantage on the economy is more pronounced among men (14 points) than among women (3 points).

TERRORISM AND THE ISLAMIC STATE

Fears of terrorism, as well as the threat posed by the Islamic State group in Iraq and Syria, continue to be top issues for Americans, and Republicans have an edge on handling both issues. Likely voters trust Republicans more than Democrats on protecting the country, 42 percent to 20 percent, and on handling international crises, 35 percent to 25 percent. Republicans also hold a smaller lead on handling the U.S. image abroad, 33 percent to 27 percent.

As airstrikes in Syria and Iraq continue, the poll suggests concerns about the Islamic State group may be retreating in importance. The percentage of likely voters saying the threat posed by the Islamic State is an extremely or very important issue fell 6 points to 73 percent, while the share calling terrorism (76 percent) or the U.S. role in world affairs (66 percent) important issues held steady.

Most likely voters now say they think the Republican Party will capture control of Congress, putting the voting public largely in line with the most prominent election forecasters.

Voters’ expectations aren’t quite as black and white as those of electoral prognosticators, however. Combining a question about which party voters think will win the Senate with one on who they think will win the House, half of likely voters (50 percent) predict the Republicans will both capture the Senate and retain the House, while 22 percent think things will stay just as they are. Those who think the election will result in both a Democratic takeover of the House and a hold in the Senate make up 23 percent of likely voters. And a scant 5 percent think both houses of Congress will change hands, an outcome predicted by roughly zero election-watchers. Among those likely voters who say they are paying “a great deal” of attention to news about the election, just 2 percent foresee that outcome.

Likely voters in the new poll say they would prefer to have the Republicans win control of Congress (47 percent) in greater numbers than favor the Democrats (39 percent). But there are few signs in the poll that the preference extends beyond the ballot box.

Although three-quarters of Americans see the U.S. response to the Ebola outbreak as an important issue, neither party stands out to most voters as more trustworthy than the other on handling public health issues like it.

The Ebola outbreak is one of the top issues on voters’ minds as Election Day approaches, with 74 percent saying it is a very or extremely important issue. And likely voters aren’t happy with the administration’s response, as 56 percent say they disapprove of Obama’s handling of the U.S. response to the Ebola outbreak.

But that doesn’t mean either party is poised to take advantage of Ebola fears come Nov. 4. More than half of likely voters say either that they trust both parties equally (29 percent) or that they trust neither party (24 percent) to address public health issues like Ebola. Respondents who do have a favored party on the issue are about evenly divided between Republicans and Democrats, 25 percent to 22 percent. Among those likely voters who call the issue “extremely important,” Republicans do have an edge, 31 percent to 19 percent, yet 49 percent decline to choose one over the other.

The AP-GfK Poll was conducted Oct. 16-20, using KnowledgePanel, GfK’s probability-based panel designed to be representative of the U.S. population. It involved online interviews with 1,608 adults, and has a margin of sampling error of plus or minus 2.8 percentage points for all respondents. Among 968 likely voters, the margin of sampling error is plus or minus 3.6 points.

Respondents were first selected randomly using phone or mail survey methods, and later interviewed online. People selected for KnowledgePanel who didn’t otherwise have access to the Internet were provided with the ability to access the Internet at no cost to them.