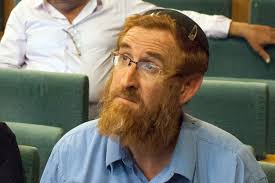 The Temple Mount Faithful organization hosted a conference at that venue. MK Moshe Feiglin had spoken and left the area. At the end of the conference, Rabbi Yehuda Glick, accompanied by Manhigut Yehudit Director-General Shai Malka, walked outside to his car. There was a motorcyclist with his helmet on standing there. He turned to Rabbi Yehuda in a thick Arabic accent, made sure of his identity and then shot him three times at point blank range. The tzibur is requested to be mispallel for Yehuda Yehoshua ben Rivka Ita Brenda bsoch kol cholei am yisrael.

MK Moshe Feiglin stated “The writing was and is still engraved on every possible wall. The flaccidity of the defense forces and Minister of Public Security Aharonovich in the face of the constant Arab violence against Jews on Har Habayis – coupled with persecution of Jews on the Mount and the prohibition against Jewish prayer there – encourage further violence and have brought about this attempted murder. The most important response to this despicable act is to open Har Habayis to Jews and to remove the prohibition against Jewish prayer there. I will be at Har Habayis on Thursday morning (6 Marcheshvan) at 8:00. Please join me.”