Arab media sources however have published photos of worshippers praying on Har Habayis so it is not certain if police have truly closed down the site to everyone or possibly, permitting some Islamic worshipers onto the holy site.

Photo below was released by the Arab media to show there are worshipers in the mosque this morning. 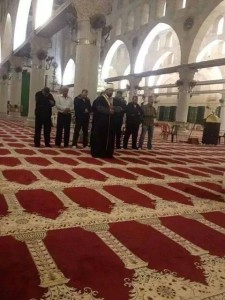