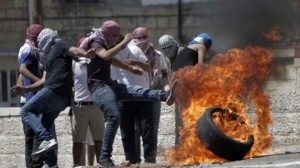 A tourist sustained non-serious injuries by a flare fired by an Arab male in the eastern portion of Yerushalayim. Ichud Hatzalah reports a female tourist was injured in her head.

Serious clashes between police and Arabs in the Abu-Tur area of Yerushalayim.

Arabs near an entrance to Har Habayis shouting “Slaughter the Jews”. Police on the scene.

A 17-year-old Arab male from Shuafat was arrested on suspicion of throwing rocks at a bus near Shar Shechem.

Attempted violence by Arab youths was met with a quick border police response, thereby neutralizing the situation before it escalated.

Arabs hurl stones at Israeli apartments on Meir Nakir Street in the Armon HaNatziv neighborhood of the capital.

Security forces have made another arrest in the attempted assassination of Rabbi Yehuda Glick. At present it is unclear what role the suspect is believed to have played in the attack.

Police used riot control apparatus to distance Arabs who began throwing rocks in the Jabil Mukhaber neighborhood of the capital.