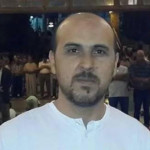 The terrorist responsible for today’s vehicular attack on Route 1 in Yerushalayim is from a prestigious terrorist family. A brother of today’s terrorist was released in Shalit deal and exiled abroad due to his heinous acts of terror.

The terrorist responsible for the attack YS”VZ was affiliated with Hamas and known to security agencies. He is identified as Ibrahim el-Achri, a resident of the Shuafat Refugee Camp in the northern capital.

(YWN – Israel Desk, Jerusalem – photo is that of the terrorist)