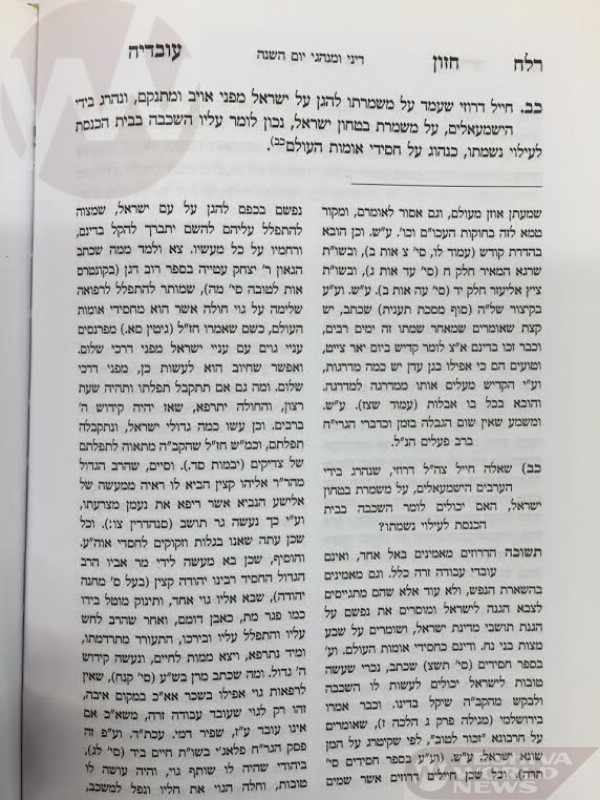 A Druzi soldier who stood at his post to defend Israel against the enemy and is killed by the Arab enemy forces while acting in defense of Israel, it is proper to recite Hashkava for him in the synagogue to further uplift his soul, as is customary regarding all righteous gentiles.

In a footnote, Rav Ovadiah further explains: Druzim believe in One G-d and are not considered idol worshippers at all. They believe in the concept of a soul. Furthermore, they enlist in the Israeli Defense Forces and risk their lives in defense of the residents of the State of Israel. They observe the seven Noachide laws and their status is that of Chasidei Umos HaOlma – the Righteous of the Gentile Nations. Also see the Sefer Chassidim (#790) who writes : A gentile who did good things for Klal Yisroel, one may make a Hashkava for him and request of the Holy One Blessed be He to judge him favorably, and the sages have already stated in the Jerusalem Talmud (Megillah 3:7) that we employ the term “May his memory be for the good” regarding Charvona who spoke against Haman, the enemy of the Jews. [See also the Sefer Chassidim #605].

Certainly, this is the case for Druzi soldiers who place their lives in jeopardy to defend the lives of the nation of Israel that it is a Mitzvah to pray to Hashem Yisbarach for them to be judged favorably and His Mercies are on all His creations. Go and see what the Gaon Rabbi Yitzchok Attiah wrote in his book Rov Dagan (Kuntrus Os L’Tovah chapter 45).. And if his prayers will be accepted and it will be a time of Divine Mercy and he will be healed there will be a great sanctification of the Divine Name publicly. And so did many great men of Israel and their prayers were accepted, as our sages have said, “The Holy One is desirous of the prayers of the righteous (Yevamos 64a). He concludes that the great Rabbi, Rav Eliyahu Katzin cited a proof to this from Elisha the prophet who cured Naaman from his leprosy. Through this he became a Ger Toshav (See Sanhedrin 96b). Certainly in our times, where we are in Galus we must do so. He added that such an incident happened with his father, the great Rabbi Rav Yehudah Katzin (author of the Machaneh Yehudah). A gentile came to him with a baby in his arms near death, who was as inactive as a stone. After the Rabbi prayed upon him and blessed him, he awakened from his coma, and immediately recovered, leaving death and embracing life. A great sanctification of the Divine name occurred.

The above is a translation of Rav Ovadiah’s ruling. It is quite clear that this Druze policeman who entered into danger to save lives in a synagogue is certainly one of the righteous gentiles of the world of whom Rav Ovadiah zatzal referred.