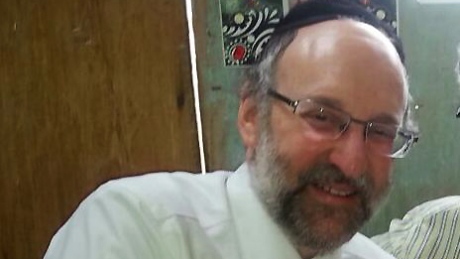 R’ Chaim Yechiel Rothman was still fresh from celebrating the birth of his first granddaughter when he was struck in the head by an axe wielded by a Palestinian attacker.

He  is now  fighting for his life in a medically induced coma.

In a Tuesday statement to press, R’ Chaim Yechiel’s sister, Shelley Rothman-Benhaim, of Montreal said her brother remains “in a medically induced coma. He was very seriously injured and has already undergone several surgeries due to the attacks to his head, eyes and arms.”

The National Post quoted  R’ Rothman’s relative  saying  “He’s lost vision in one eye, they were able to minimize bleeding in the brain, but according to the CT scan there’s been an enormous amount of brain damage, If he does survive this, his quality of life, we still don’t know,”

Rabbi Rothman is the father of 11 children, the youngest of whom is 3 years old.

A longtime resident of Har Nof in Jerusalam, Mr. Rothman prayed regularly at Kehilas Bnei Torah, the site of Tuesday’s attack. He also made it a daily routine of learning before he came home from work.

Although the Rothman family lived in Jerusalem through two Intifadas, Tuesday’s attack is reportedly their first direct encounter with terrorism.

Nine years ago, however, their eldest son Eliyahu Mordechi was killed at the age of 17 after falling off a cliff while riding his bicycle through the Jerusalem Forest.

Nine years ago, R’ Chaim Yechiel’s oldest son, Eliyahu Mordechi, was killed at the age of 17 after falling off a cliff while riding his bicycle through the Yerushalayim Forest.