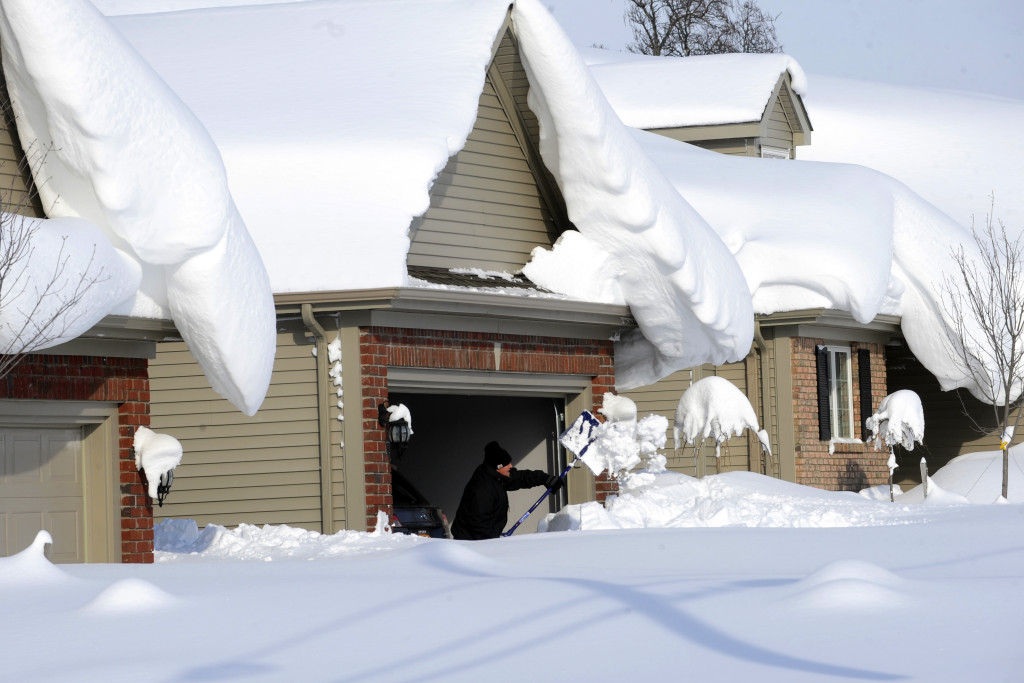 A new blast of lake-effect snow pounded Buffalo for a third day on Thursday, piling more misery on a city already buried by an epic, deadly snowfall that could leave some areas with nearly 8 feet of snow on the ground when it’s all done.

But the meteorological “kick me” sign on the city hasn’t fallen off just yet. Forecasters say a rapid weekend warmup, with temperatures as high as 60 and rain, could turn all that snow into floods.

“It is an extraordinary situation,” Gov. Andrew Cuomo told reporters after touring the region Wednesday and talking to truckers who had been stranded more than 24 hours on the Thruway. “It will get worse before it gets better.”

Even for Buffalo, a place that typically shrugs at snow, this was a stunning snowfall — the kind of onslaught folks will be telling their grandchildren about.

Those living in the Buffalo area were already buried under as much as 5Â½ feet of snow Wednesday, and they awoke Thursday to more heavy snow that could bring 1 to 3 feet more. The new snow and high winds moved through the city of Buffalo with lightning and thunder overnight Thursday, dropping several inches before blasting towns to the south, which were in line for the highest totals, National Weather Service meteorologist David Zaff said.

“This is an historic event. When all is said and done, this snowstorm will break all sorts of records, and that’s saying something in Buffalo,” Cuomo said.

The storm came in so fast and furious over Lake Erie early Tuesday it trapped more than 100 vehicles along a 132-mile stretch of the New York State Thruway that remained closed Wednesday.

Tom Wilson, of West Seneca, split a Salisbury steak frozen dinner with co-workers and tried his best to get some rest when he was stuck 36 hours at his warehouse job.

“I slept on a pallet. Then I slept on some office chairs, and then I went back to the pallet,” Wilson said. “Then I found some sponges to lay on. I found one pack of sponges unopened. That looks like a pillow to me.

“We tried to make popcorn with a two-by-four, two empty pop kegs, some charcoal and a dust pan,” he added. “It didn’t work.”

Bethany Hojnacki went into labor at the height of the storm and ended up giving birth in a Buffalo fire station after she and her husband couldn’t get to the hospital. Mother and daughter were later taken to the hospital in an ambulance.

Cuomo said Wednesday afternoon that all trapped travelers had been removed from their cars, though some truckers were staying with their rigs.

Asked by reporters how officials could allow people to be snowbound in cars for 24 hours, Cuomo cited a jackknifed trailer that prevented plows from removing fast-falling snow, and drivers’ own wrongheaded choices.

“What happened was, even though the Thruway was officially closed, people went on. We didn’t immediately block every entrance. It was a mistake,” Cuomo said.

“Part of it is citizen responsibility,” he added. “If the road is closed, it’s closed.”

The storm was blamed for up to eight deaths in western New York, at least five of them from heart attacks. Erie County officials announced the latest death on Thursday, that of a man in his 60s who was stricken Wednesday while operating a snowblower.

Residents of a mobile home park in the suburb of West Seneca were being evacuated Thursday after their roofs began to collapse under the weight of heavy snow.

The NFL’s Buffalo Bills offered $10 an hour plus game tickets for people willing to help shovel out the stands in Ralph Wilson Stadium in Orchard Park, in the snow belt southeast of the city.

Team spokesman Scott Berchtold said the team has an estimated 220,000 tons of snow to remove from the stadium before Sunday’s game against the Jets — more than ever before.

Sunny skies returned to some hard-hit areas Wednesday, but workers were still trying to cart off the acres of snow. Lake-effect snow fell heavily on some northern New York areas east of Lake Ontario.

With an additional 2 feet possible on Thursday, the one-week totals for the hardest hit areas will approach the average snowfall for an entire year: 93.6 inches, or close to 8 feet. It won’t stick around, though. With temperatures expected to rise above freezing on Saturday and approach 60 by Monday, flooding is likely to produce the next challenge.

The highest snowfall total for the Buffalo area this time was 65 inches, recorded in Cheektowaga. National Weather Service meteorologist David Church said forecasters haven’t determined yet how this storm ranks, but that 60 to 70 inches in 24 hours is probably in the top 5 for the region.

The heaviest 24-hour snowfall on record in the Lower 48 states is 75.8 inches, which fell at Silver Lake, Colorado, in 1921, according to the government.