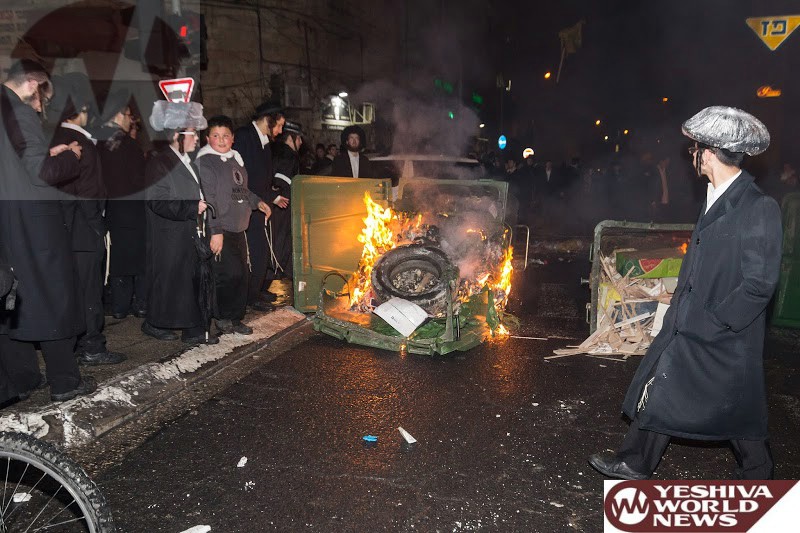 A Yerushalayim resident, a member of the capital’s chassidish community, was invited to a friend’s chasenah as a witness. Prior to the chupah the man was instructed to speak with the chosson’s rebbe. The rebbe asked him to make certain all of his debts are paid in full prior to being a witness. This prompted the young man to recall that three years earlier he was involved in a stormy protest during which they set three garbage bins ablaze in Meah Shearim.

Deputy Mayor Yossi Deutsch was taken by surprise when the man approached him to ask him how much to pay. He explained the need to reimburse the city for three trash bins. Deutsch asked him to explain and the young man told the story of the protest and that the bins were set ablaze. He explained that he wishes to be a witness at the chasenah and that the rebbe explained he must be debt free to do so.

He told Deutsch “I was pleased to have the opportunity to receive a bracha from the rebbe, meeting with him a week before the chasenah. I traveled to the rebbe’s home as he wished to meet with the witnesses prior to being mesader keddushin. The rebbe asked if I owe anyone or perhaps I neglected to pay money in a din torah or the like. I explained, albeit hesitating for a moment, that I am an honest person, earn a living honestly, and that I do not remember taking money from anyone ever.

“But just as I was about to part from the rebbe I remembered something and I told the rebbe a few years ago I took part in a protest and set garbage bins ablaze. How many times since have I regretted this and the damage to residents in the area, but I appeased myself by explaining the damage for the city was minimal and the bins were replaced.

“The rebbe smiled and told me ‘take care of this before the chasenah’. This is why I am here, hoping you can tell me how much money I owe. So I am asking you to please check this out for me so I can pay what I owe as quickly as possible”.

Deutsch informed the young man that after looking into it, he owes the city 3,250 NIS. However, he learned the city cannot accept his payment since it should rightfully go to the company contracted to place the bins around the city.

Realizing the young man was determined, Deutsch explained he will do his best to probe the matter. He found a way to permit him to pay, by registering him as an authorized contractor in the city computer system and placed an order for three trash bins for Meah Shearim Street. The young man then took the purchase order to the cashier and paid in full for the bins.

Seeing the rebbe at the chupah, the young man proudly showed him the receipt for the trash bins. The rebbe smiled as he told him he may now be a witness.