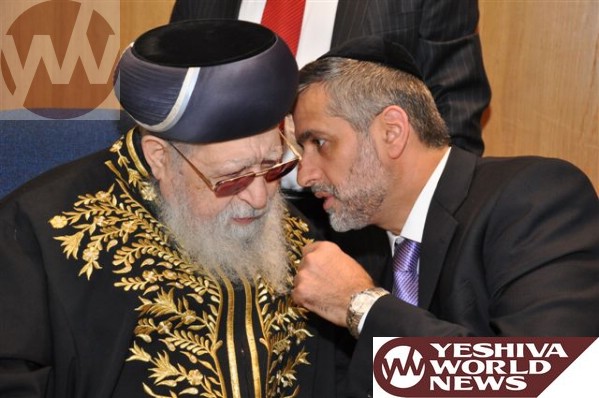 According to a Channel 2 News report on Sunday evening 22 Kislev, the name of the new party being formed by Eli Yishai is “Maran”. The report adds that if he runs with Uri Ariel, who heads the Tekuma faction of Bayit Yehudi, the new combined Maran and Tekuma party would be called “Yachad”, together.

The report adds that Shas has already indicated it will file an objection with the Central Election Committee over the use of the name Maran.

During a press conference earlier in the day when Mrs. Adina Bar-Shalom announced she was not going to run for Knesset but would be remaining in Shas to work behind the scene, Deri reminded listeners that “Maran gave me back the deposit and placed me at my spot, back at the helm of Shas”.

Deri is working hard to exhibit achdus but with the imminent resignation of former party leader Eli Yishai, it is clear the party is imploding. Polls show that if elections were held with Deri running the party after Yishai resigned, the results are into the single digits, 7-9 seats, a drop from its current 11 seats.