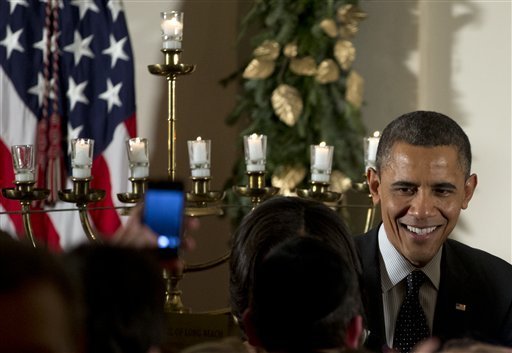 The following are the remarks by President Obama at the Whitehouse Chanukah party:

MRS. OBAMA: Welcome to the White House. I want to welcome the members of Congress who are here today. We’ve got some Bronfman Fellows — (applause) — who are here from the State of Israel. (Applause.) Obviously, the bonds between our two countries are unbreakable, and with the help of young people, they’re only going to grow stronger in the years to come.

Every year, Michelle and I like to invite just a few friends over for a little Hanukkah celebration. (Laughter.) Nothing fancy. Actually, this is the second year we’ve invited so many friends that we’re hosting two parties instead of one. This is our first party — it is the best party. (Laughter.) Don’t tell the others, though.

I want to begin with today’s wonderful news. I’m told that in the Jewish tradition, one of the great mitzvahs is pidyon shvuyim. (Applause.) My Hebrew is not perfect, but I get points for trying. But it describes the redemption, the freeing, of captives. And that’s what we’re celebrating today, because after being unjustly held in Cuba for more than five years, American Alan Gross is free. (Applause.)

Alan has dedicated his life to others — to helping people around the world develop their communities and improve their lives, including Israelis and Palestinians. He’s a man of deep faith who once worked for the Jewish Federation of Greater Washington. Five years ago, he was arrested by Cuban authorities simply for helping ordinary Cubans, including Cuba’s small Jewish community, access information on the Internet. And ever since, those who have loved and cared for Alan never stopped working to bring him home: Judy, his wife of 44 years, and their daughters, including his oldest daughter who walked down the aisle without her dad on her wedding day. His mother, who passed away this year without being able to see her son one last time. His whole family, including his sister-in-law, Gwen Zuares, who joins us here today — where is Gwen? (Applause.) Hey, Gwen. His rabbi, his friends at his congregation in Maryland, Am Kolel, who kept him in their prayers every Shabbat. Jewish and other faith leaders across the country and around the world, including His Holiness Pope Francis. And members of Congress and those of us in the United States government.

And Alan has fought back. He spoke out from his cell, he went on a hunger strike. With his health deteriorating, his family worried he might not be able to make it out alive. But he never gave up, and we never gave up.

As I explained earlier, after our many months of discussion with the Cuban government, Alan was finally released this morning on humanitarian grounds. I spoke to him on his flight. He said he was willing to interrupt his corned beef sandwich to talk to me. (Laughter.) I told him he had mustard in his mustache; I couldn’t actually see it. (Laughter.) But needless to say, he was thrilled. And he landed at Andrews in a plane marked “The United States of America.” (Applause.)

He’s going to be getting the medical attention that he needs. He’s back where he belongs — in America, with his family, home for Hanukkah. And I can’t think of a better way to mark this holiday, with its message that freedom is possible, than with the historic changes that I announced today in our Cuba policy. (Applause.) These are changes that are rooted in America’s commitment to freedom and democracy for all the Cuban people, including its small but proud Jewish community. And Alan’s remarks about the need for these changes was extremely powerful.

So what brings us together is not just lox and latkes — (laughter) — although I have heard the latkes here are outstanding. (Applause.) Am I wrong? Not as good as your mom’s, but they’re good. (Applause.)

We’re here to celebrate a story that took place more than 2,000 years ago, when a small group of Maccabees rose up to defeat their far more powerful oppressors. In the face of overwhelming odds, they reclaimed their city and the right to worship as they chose. And in their victory, they found there wasn’t enough oil to keep the flame in their temple alive. But they lit the oil they had and, miraculously, the flame that was supposed to burn for just one night burned for eight. The Hanukkah story teaches us that our light can shine brighter than we could ever imagine with faith, and it’s up to us to provide that first spark.

This is something that Inbar Vardi and Mouran Ibrahim know very well. They are Israeli ninth-graders at Hand in Hand, which is a bilingual school in Jerusalem. (Applause.) For more than a decade, it’s brought Jewish and Arab children together. So Inbar is Jewish; Mouran is Muslim.

Just two weeks ago, their school’s first-grade classroom was set on fire by arsonists. In the weeks that followed, they and their classmates could have succumbed to anger or cynicism, but instead they built this menorah, one of four that we brought here from Israel this year. Each of its branches are dedicated to one of the values their school is founded on — values like community and dignity and equality and peace. Inbar and Mouran flew here from Israel along with Rebecca Bardach, the mother of a first-grader and second-grader at Hand in Hand, and in just a few minutes the three of them are going to join us in lighting the Hanukkah candles here at the White House. (Applause.)

So Inbar and Mouran and their fellow students teach us a critical lesson for this time in our history: The light of hope must outlast the fires of hate. That’s what the Hanukkah story teaches us. That’s what our young people can teach us — that one act of faith can make a miracle. That love is stronger than hate. That peace can triumph over conflict. And during this Festival of Lights, let’s commit ourselves to making some small miracles ourselves and then sharing them with the world.

I now want to invite Rabbi Bradley Shavit Artson to the podium who can lead us in the blessings for the candle lighting. Rabbi. (Applause.)

(The blessings are given.)