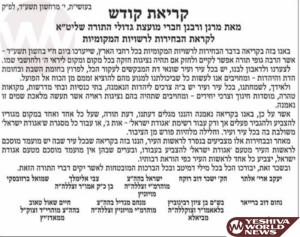 Seeking to head off the issues of using Kameyo’s in the election campaign, the Hiddush organization has already petitioned the Central Election Committee to ban their use as part of electioneering.

The Hiddush organization has turned to the committee head, Justice Salim Jubran to prohibit political parties from including cameos in the campaign. Hiddush reminds Jubran of the use of Kameyos in previous elections including the last, for the 19th Knesset, reminding him how chareidi parties used them to attract voters.

Uri Regev, CEO of Hiddush reminds Jubran of the ban against using a kol korei promising voters brachos from a Moetzas Gedolei Hatorah and how these were prohibited in the last national and local elections. Regev points out how civil service rabbonim on state payroll become involved in elections, which is a violation of the law, and the problematic involvement of schools and yeshivas. Regev calls on setting clear limits to prevent involvement of educational institutions in electioneering, highlighting the need for students to be involved in learning and not campaigning on behalf of one party or another.

Regev warns that without immediate and tenacious actions by the committee we can expect of repeat of these violations, which are best prevented before they begin.