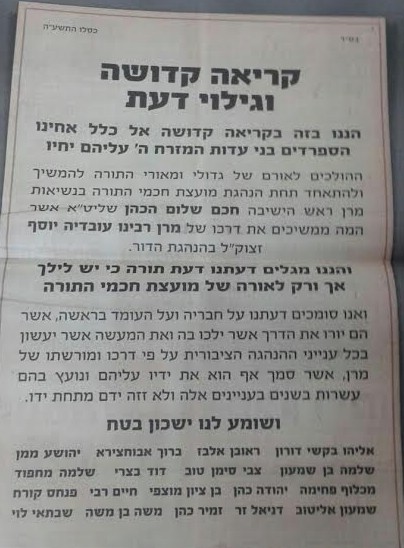 Former Rishon L’Tzion Rabbi Eliyahu Bakshi-Doron is one of the dozens of Sephardi rabbonim shlita who signed a letter expressing their support and backing for the Shas party Moetzas Gedolei Yisrael headed by HaGaon HaRav Shalom Cohen Shlita.

Rabbi Bakshi-Doron feels the need to issue a clarification that his endorsement is for the rabbinical body but should not be interpreted as support for any political party over another.

The rav’s name is the first on the declaration. Aides to the former Rishon L’Tzion are angered, Kikar Shabbos reports, explaining the rav was not informed the declaration would be used in an election campaign for Shas.

The rav’s aides add that when first ask to sign he refused, explaining he does not get involved in politics. An askan who is close to Rabbi Bakshi-Doron was sent to persuade him, assuring him the declaration was a “torani statement” and nothing more. This has already proven not to be the case as the media is carrying the endorsement as an endorsement for Shas against Eli Yishai.