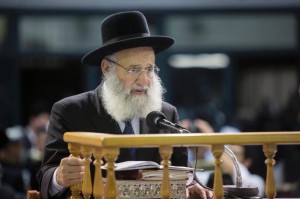 Rav Elbaz told participants that Shas is the only party to vote for, stating the problem is that the tzibur underestimates its own strength. Rav Elbaz told the tzibur to look back at Maran HaGaon HaRav Ovadia Yosef’s ZT”L levaya, adding that if one million people vote Shas the party can 40 seats in Knesset.

The rav added that Shas operates a large Torah enterprise and therefore, the tzibur must come out and support the party. Rav Elbaz cited that all of the baalei teshuvah are due to Shas and the tzibur has to show its gratitude to Shas.