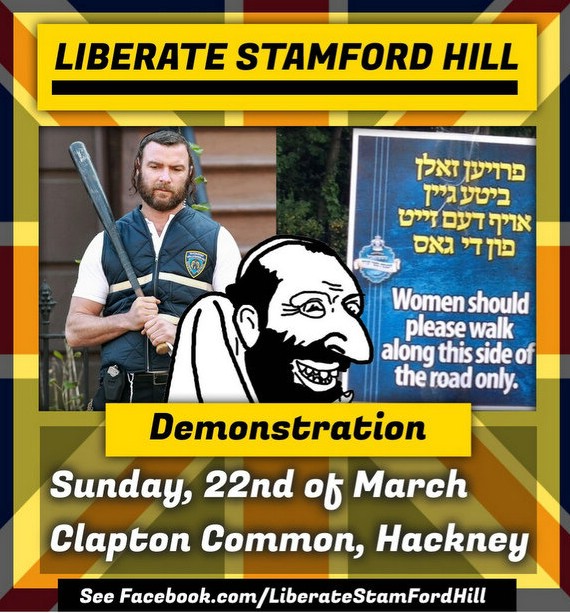 An extreme-right anti-Semitic group has called for a demonstration in London’s Stamford Hill in March to protest against the “Jewification of Great Britain”.

According to The Jewish Chronicle, news of the march, called “Liberate Stamford Hill”, has spread on Twitter and Facebook, with organiser Joshua Bonehill-Paine calling on his followers to “fight back” against the “Jewification” of the predominantly Orthodox Jewish area of North London. Posters are promoting the rally.

One post on Twitter shows a cartoon man with a big nose and kippah. The text reads “Jewification: Where Jewish culture occupies White countries, rendering them unrecognizable. #LiberateStamfordHill.”

Bonehill , described as a ‘’nationalist, socialist and fascist,”said the march was against the Stamford Hill voluntary security group Shomrim, which he called “foreign and unlawful” and which he said “enforces Talmudic law on the streets.”

On his blog, he recently stated: “I can’t just sit here and do nothing whilst White people are being driven out of their homes by this Jewish menace.”

A Police spokesman said: “We are aware of this application and a decision on whether to allow this demonstration has yet to be made. We are in consultation with the community about the possible impact of the event.”

According to a recent survey, nearly half the population of Britain hold at least one anti-Semitic view.

When presented with an anti-Semitic view, around 45% of British adults said they believed it was “definitely or probably true”, including (13%) who thought Jews talked about the Holocaust to get sympathy, according to the study.

The poll of more than 3,400 people also revealed 25% of Britons believed that Jews chase money more than other British people and 17% believed Jews had too much power in the media and felt they thought they were “better than other people”.

In a separate poll, 54% of British Jews feared they had no future in the UK and a quarter said they have considered leaving the country in the last two years.

The two YouGov polls, both commissioned by the Campaign Against Antisemitism (CAA), were conducted before the recent terror attacks in Paris but coincided with a rise of anti-Semitic attacks in the UK over the past year.

Gideon Falter, chairman of the CAA, said the research is a “wake-up” call following the recent attacks in Paris which left 17 people dead, including four Jewish people in a Kosher supermarket.

He said: “Britain is at a tipping point. Unless anti-Semitism is met with zero tolerance, it will grow and British Jews will increasingly question their place in their own country. Britain’s Jews must be shown that they are not alone.”