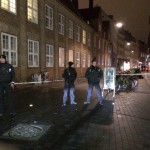 A shul security guard was shot and killed in Copenhagen while a bas mitzvah was taking place inside. At least three policemen were injured by gunfire. The attack occurred shortly after midnight on motzei Shabbos Parshas Mishpatim. The Israel Foreign Ministry named the Jewish victim as Dan Uzan, 37, whose father is Israeli and mother is Danish. He was a volunteer guard at the shul.

Police believe the same person perpetrated both attack, referring to the earlier shooting in the Arts Café in which one person were killed and three policemen wounded. The earlier hosted in the Arts Café was called “Art Blasphemy & Freedom of Expression”, attended by public officials including French Ambassador to Denmark Francois Zimeray, who compared the day’s fatal shootings to the recent attacks in Paris at the Charlie Hebdo office and the Paris kosher supermarket. Twelve people were murdered in the attack at the Charlie Hebdo office and four Jews were killed in the erev Shabbos attack at the kosher supermarket.

According to local media reports, masked gunmen opened fire at the Arts Café Cultural Center shortly after 15:30 on Saturday afternoon. An estimated 30 shots were fired from automatic weapons immediately after Ambassador Zimeray completed his remarks.

The shooter is described as a male with an athletic build, 25-30, with an Arabic appearance.

Prime Minister Helle Thorning-Schmidt said Denmark was on high alert after the attack. It is believed the shooters were after Swedish artist Lars Vilk, who has been the subject of threats due to his provocative cartoons of the Prophet Mohammed including one picture in which Mohammad was depicted as a dog.

At the start of the Sunday morning weekly cabinet meeting, Prime Minister Binyamin Netanyahu commented to the media on the attack, stating, “Extremist Islamic terrorism has struck Europe again, this time in Denmark. We send our condolences to the Danish people and to the Jewish community in Denmark. Jews have been murdered again on European soil only because they were Jews and this wave of terrorist attacks – including murderous anti-Semitic attacks – is expected to continue.

“Of course, Jews deserve protection in every country but we say to Jews, to our brothers and sisters: Israel is your home. We are preparing and calling for the absorption of mass immigration from Europe. I would like to tell all European Jews and all Jews wherever they are: ‘Israel is the home of every Jew.’

“Today we will submit to the Cabinet a NIS 180 million plan to encourage the absorption of immigrants from France, Belgium and Ukraine. We will submit additional plans later. To the Jews of Europe and to the Jews of the world I say that Israel is waiting for you with open arms.”

Rabbi Menachem Margolin has called upon European leaders to take action on terror against minority communities, following the deadly terror attack at the Copenhagen’s shul. According to the General Director of the European Jewish Association, EU heads have a tendency to “bury their heads in the sand”, and do not act sufficiently in order to prevent anti-Semitic attacks from taking place – both security wise and through education. “We demand that European governments and EU institutions increase security around all Jewish institutions,” added Rabbi Margolin in a statement Sunday.

“European leaders need to support us in fighting the battle on terror in our homeland,” he said.

Rabbi Margolin emphasized that “unfortunately, the Danish government, like other governments across the continent, has not yet implemented the need to secure all Jewish institutions 24/7”. “It is only because of the earlier shooting that took place in the Copenhagen cafe that police sent several officers to the synagogue, and they were able to return fire and chase the shooter,” he added. “But the fact is that prior to the earlier incident, there were no police in the synagogue, and the unarmed security guard could have not prevented the terrorist from entering the synagogue and causing even more deaths,” he concluded.

Rabbi Margolin called upon Muslim leaders across Europe – many of whom promote mutual respect between all faiths, to speak out loudly and firmly against extremism and bloodshed committed supposedly in the name of religion.

Rabbi Margolin noted that in the aftermath of this latest attack, the EJA’s planned seminar next week in Prague, at which dozens of rabbis and Jewish community leaders from across the continent will meet, will offer training in basic self-defense and first aid.

“The alarms were already sounded last August when a Jewish school in Copenhagen was stoned and sprayed with anti-Semitic graffiti,” said Rabbi Margolin, of yesterday’s attack. “We call on European Governments, as well as EU institutions, to heed our calls for the establishment of a Pan -European task force in order to increase security around Jewish institutions and enhance education against the rampant anti-Semitism,” stressed the EJA Director.