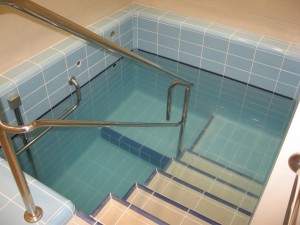 For the past four years, 30,000 women living in the Reches HaCarmel neighborhood have had to travel elsewhere to go to mikve. Renovations began in the community mikve four years ago and have yet to be completed.

Until 2011 a mikve operated in the Beis Knesses Eliyahu HaNavi complex on Sderot Sinai, but as the community dwindled the shul could not undertake the growing cost of maintain the mikve, which was closed. Since then, the women from the Reches, Achuza (Hod Carmel), Denya, Ramat Eshkol, Ramat Almogi, Ramat Golda and the Romeima neighborhoods have had to travel to a mikve in another community.

In the city that is home to 300,000, there are only mikvaos operating in Kiryat Shmuel and in the Hadar, N’vei Sha’anan and Merkaz Carmel neighborhoods. In many cases women must push of toiveling until after Shabbos.

Rabbi Prof. Daniel Hershkowitz, formerly of Bayit Yehudi is the rav of the Achuza neighborhood. When he turned to the party and the Ministry of Religious Services, the ministry demanded that the mikve must be turned over from the nonprofit that controls it to the ministry in order for the ministry to undertake the cost of renovations. A year passed and the papers were signed. The 19th Knesset elections passed, and Bayit Yehudi took control of the Ministry of Religious Services. Deputy Minister Rabbi Eli Ben-Dahan gave the word and the renovations began. Another mikve in the city has since been refurbished and a reopening ceremony was held a number of months ago. A number of days after reopening a leak that rendered the mikve pasul was discovered. That mikve has yet to reopen.

About 70 people took part in a meeting this past motzei Shabbos to address the mikve. Local and national government officials took place along with local rabbonim and elected officials. The ministry explained close to 1 million shekels was invested in the renovation but inspectors found a great deal of substandard workmanship and materials. The city is taking the contractor to court. Simultaneously, experts are addressing the mikve and efforts are underway to repair the issues that have rendered the mikve pasul.