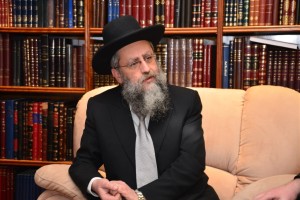 No one really knows what the story will be on the day following the 20th Knesset elections but if the polls are any indication, the Shas party is hurting badly. Deri continues to drop in popularity polls, rated the least trustworthy MK.

Shas as a party is running an interesting election campaign, based primarily in efforts to discredit Yahadut Hatorah and Yachad. This week, Shas leader Aryeh Deri accused Yaakov Asher and Moshe Gafne of campaigning in Shas territory in an effort to steal Shas voters away. Deri tells the media he is calm and optimistic, but the polls paint a less than optimistic picture.

In response to Deri’s accusations MK Asher explained he is unaware of any such organized effort but Gafne’s response confirmed Deri’s allegations. Gafne stated that in the past Yahadut Hatorah has not but today, it is all fair game and Yahadut Hatorah is looking for votes wherever it can, including in Shas territory.

In his effort to discredit Eli Yishai, Rabbi David Yosef Shlita, a member of Shas’ Torah Council, has tried portraying Yishai as a total ‘am haaretz’. According to Rabbi David Yosef, “Eli Yishai cannot read [Hebrew] without vowels”. Rabbi Yosef spread his message far and wide as he made his statements during the Yeshivat Yechavei Daas kenos on Wednesday, 6 Adar.

“I remember when my father and master appointed him head of the party. I told my father ‘that man is a boor am haaretz’ and everyone that was with us till today has a torah background”.

Rabbi David explained then Yishai came to study chavrusa in the yeshiva and it soon became apparent he was unable to read without vowels.

Responding to Rav David’s words Eli Yishai stated “I forgive him with a full heart, even regarding these painful words”.