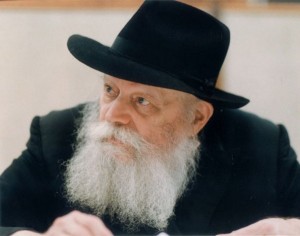 The Secretary of the Chabad Beis Din, HaGaon HaRav Yitzchak Yehuda Yuroslovsky Shlita spoke to the “Kfar Chabad” Magazine about elections. He stressed that by and large, Chabad does not get involved in elections and everyone should vote for the most chareidi party.

He stresses the this statement is not an effort to avoid responding to the question of which party to vote for, detaining in each election voters must decide which party best meets the criteria that was set by the Rebbe ZT”L. The rav reflects back to the time the rebbe was alive during elections and there was only one party, Poalei Agudas Yisrael, that met the criteria. Nevertheless the rebbe did not instruct chassidim to vote for the party.

Rabbi Yuroslovsky adds that once Dr. Yosef Burg questioned once why the rebbe instructed chassidim to vote for a specific party, to which the rebbe responded “When did I give such instructions?” Burg responded “I saw the telegraph with my own eyes that said vote for the most chareidi party that supported a united religious front”.

The rav quoted the rebbe responding “Nu, why don’t you act like this and then they will say you are the most chareidi party”.

The rav continues in the interview warning that today, there is a real threat of a left-wing government following elections and the rebbe was clear that such a government poses a true danger. He feels Chabad chassidim may not vote for any party that is willing to enter into a left-wing headed coalition and the party must commit to preserve the three ‘Shleimus’; Shleimus HaTorah, Shleimus Ha’Am and Shleimus Haaretz.

The rav frowned on politicians visiting mosdos of the chassidus for doing so signals supporting one party or another.

At the end of the interview the rav calls on chassidim to put all other considerations aside and to follow the instructions of the rebbe regarding the upcoming elections.