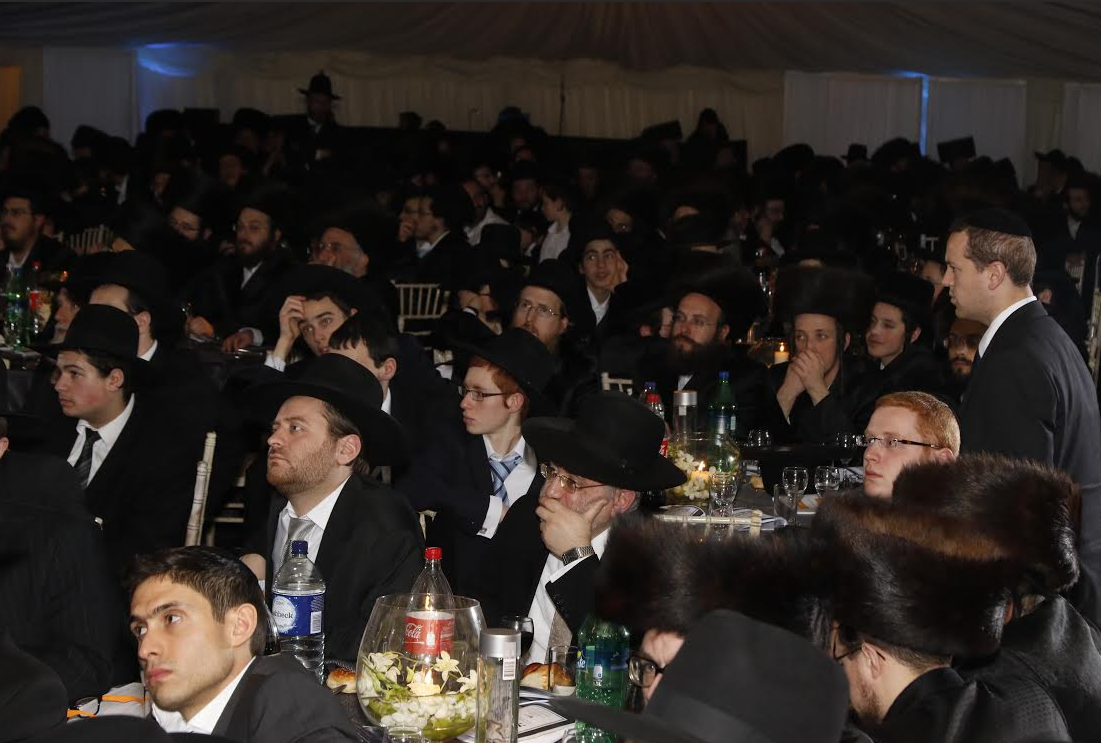 The first European Dirshu Shabbos Convention that took place this weekend attracted a vast crowd of Yidden from every section of Klal Yisroel.  The Convention was originally envisaged as celebration for the many hundreds of participants in the first Dirshu Daf Yomi B’Halacha cycle that have just concluded the learning of all six volumes of the Mishna Berurah.  However, the numbers were considerably swelled by many others who wanted to experience first-hand an event that was a unique event of kovod shomayim.

The Convention Shabbos was also greatly enhanced by the beautiful weather that accompanied the whole weekend.  Shabbos Rosh Chodesh Nissan truly announced the beginning of Chodesh Ha’Aviv the Month of Spring.  The bright sunshine helped to elevate the atmosphere from the moment that the guests arrived. 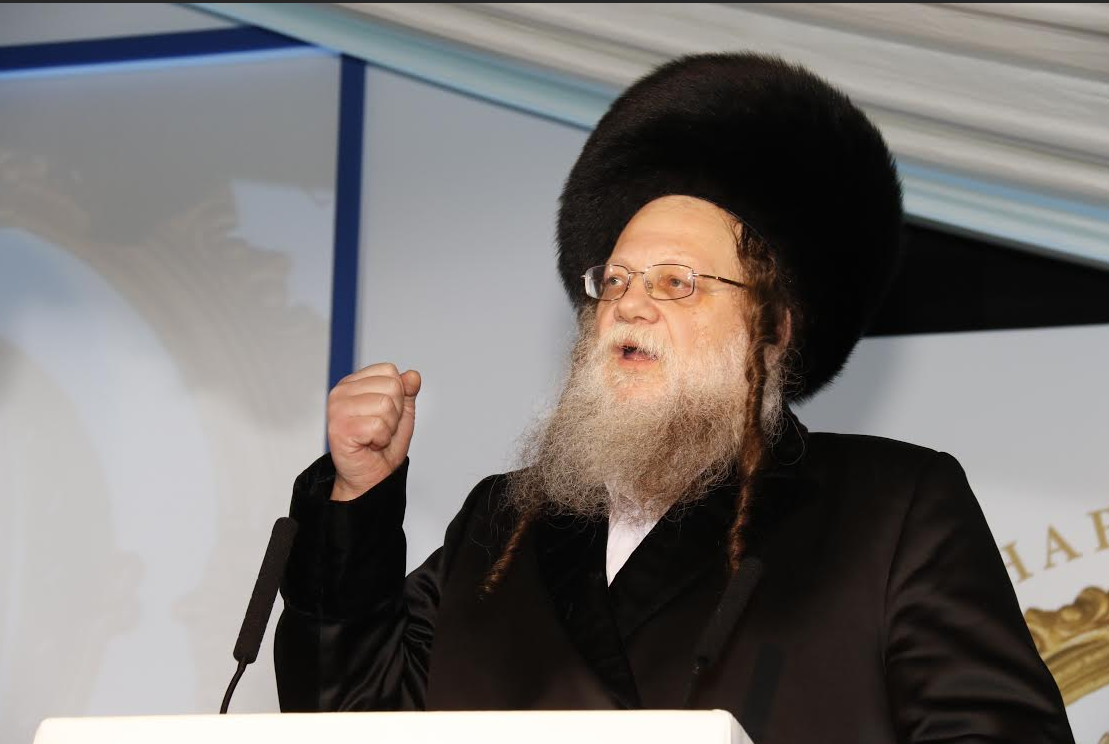 The sense of unity that enveloped the whole gathering was evident from the moment that the Beis Hamedrash began to fill with people for mincha and kabolas Shabbos.  Talmidei chachamim sat down next to avreichim and ba’alei batim, men who had just completed the whole of Orach Chayim were sitting next to those who had come to celebrate with them.

The wonderful ruach that rested on the Convention was fortified with the rousing Kabolas Shabbos.  The sheliach tzibur was accompanied by a choir of avreichim, and enthusiastically followed by the whole assembly.  The personalities sitting at the head of the Beis Hamedrash next to the aron hakodesh, were the Modzitzer Rebbe shlita, Harav Dovid Hofstedter, nassi Dirshu International, Harav Aharon Schiff, Antwerp mara d’asra, and HaravYissochor Frand, Rosh Yeshivah Ner Yisroel Baltimore.  At the conclusion of L’cho Dodi everyone joined together in a spirited rekidah. 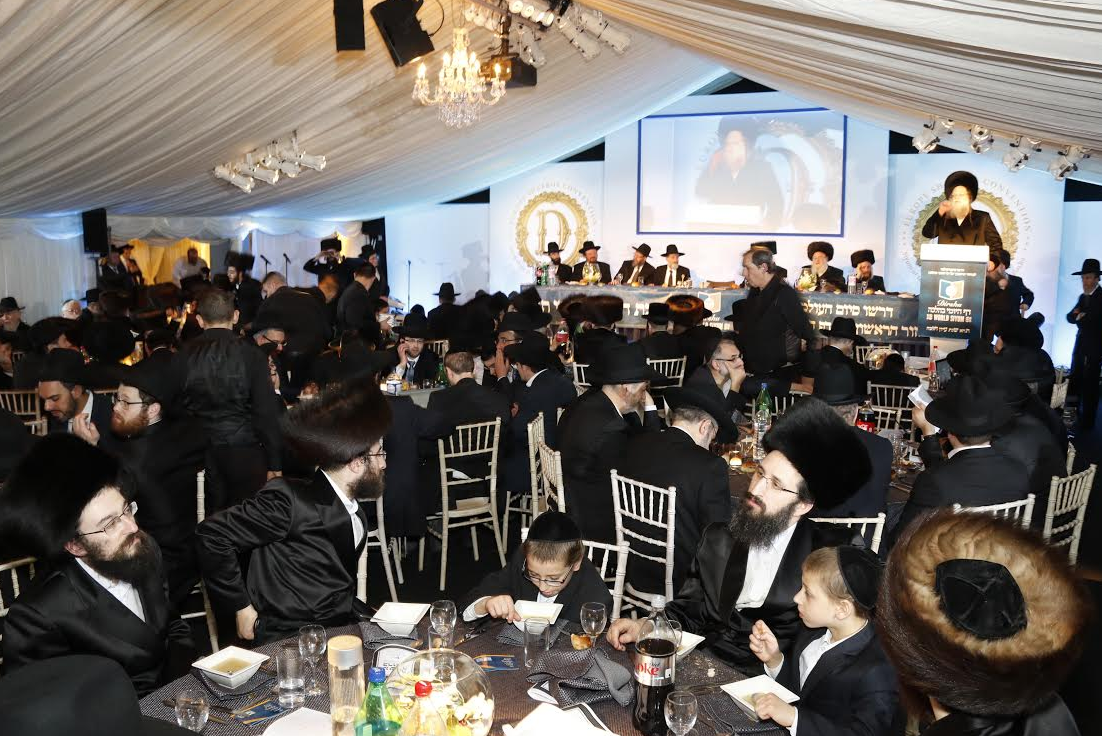 Before ma’ariv, the Convention proceedings were introduced by Reb Yisroel Stern.  In his inimitable style he made everyone feel immediately at home.  He said that the great shefa berachos that comes with the entry of Shabbos will surely be accompanied this time by the special blessings for those who come together exclusively lechovod shomayim.  Dayan Binyomin Eckstein, Menahel Dirshu Europe welcomed all the honoured guests and declared that the whole creation of Dirshu through its nassi Harav Dovid Hofstedter was truly miraculous.  The whole Convention was officially opened with an inspiring drasha from HaravYissochor Frand.  Harav Frand spoke about the responsibility of every Yid to display undivided loyalty to those people and mosdos that reared him, and to develop great sensitivity to all those human beings around him.

After ma’ariv, everyone had an opportunity of filing past the honoured guests and receive their bracha for a ‘gut Shabbos’. 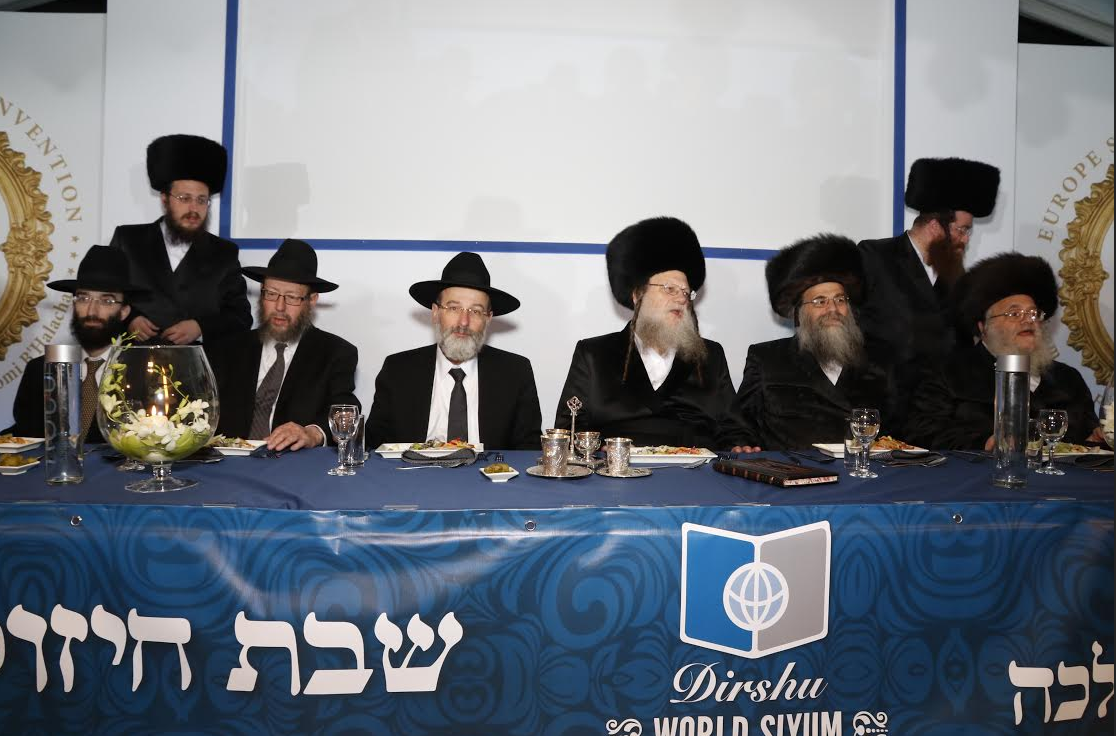 All the three seudos Shabbos were characterized with a unique combination of wonderful company, inspiring divrei torah, tuneful zemiros led by a full choir, together with excellent cuisine.  Among the many divrei torah that were said during the three meals, Rabbi Dovid Tugenthaft, Dirshu Magid Shiur in London, spoke on the many nissim that Klal Yisroel are accustomed to receive.  Rabbi E. Patkas described the way to achieve greatness in Torah is only through building with small increments, such as the steady daily learning that Dirshu participants commit themselves.  Rabbi M. Silver depicted the responsibility and the true ability of each parent to influence their children.

Following the extended seudah and bentsching on Friday night, all the participants were able to benefit from varied greatly stimulating shiurim that were held in separate rooms.  Harav Menashe Reissman spoke on the power of Seder Night to inspire the whole family with emunah for the whole year.  Harav Shraga Kallus gave an amazing wide-ranging halachah shiur.  Rebbetzen Z. Heller addressed the ladies on the way to transfer emunah to the next generation through self-example.  Rabbi DM Spiro described the great effect that even one small action can make to the whole world.

Late at night, the Modzitzer Rebbe conducted a peiros tisch that was filled by all the men, who were united together and joined in the uplifting nigunim.  The tisch was graced with the presence of Harav Dovid Hofstedter together with the other honoured guests. The Rebbe spoke divrei torah lichvod Dirshu.

Even though most of the participants remained until the end of the tisch, it was wonderful to see the Beis Hamedrash the next morning.  Dedicated Dirshu members were already fully awake, sitting at their gemoros and volumes of Mishna Berurah, in order to keep the Dirshu schedule.  In one corner, a father was learning together with his son.  In another place, a guest was saying birchas hatorah with tears of inspiration in his eyes.  Obviously, the Convention was making a deep impression on everyone.  Shiurim on Daf Hayomi and the Daf Yomi B’Halacha took place and were given by Harav Dovid Hofstedter and Rabbi MD Rechnitzer respectively.

Shacharis tefillos were again an outstanding experience.  The uplifting Hallel, led once again by the sheliach tzibur and the full choir will be remembered for a long time.  Following the sumptuous Kiddush that was enjoyed by all the participants, shiurim were held.  Once again, everyone joined enthusiastically into the learning.  Obviously, everyone felt deeply that this was the whole purpose of the Shabbos.  Harav Aharon Schiff elucidated a deep halachah shiur in a way that was appreciated by all the participants alike.  Rabbi M Lawrence spoke on the workings of a Beis Din. Harav Frand spoke to the ladies about the vital lessons in emunah that we should impart to our family.

The daytime seudah was yet another occasion when everybody was welded together by the unique achdus that is created by Yidden learning Torah.

Later in the afternoon after a short rest period, all the participants went to a further continuation of the popular Friday night shiurim given by Rabbi Reissman and Rabbi Kallus.  Rabbi M Katanka, Gateshead Dishu Coordinator addressed the ladies.

At mincha, great excitement was created when Rabbi Yisroel Stern auctioned the privilege of receiving shelishi in Krias hatorah for that mincha to the highest bidder for learning dapei Gemora.  Following a frenzied bidding when the eagerness of the participants forced the bidding up to the final amazing total of 2500 dafim to be learned by the end of Pesach!

The Shalosh Seudos tisch led by the Modzitzer Rebbe together with Harav Dovid Hofstedter and honoured guests was also filled with uplifting zemiros, negunim and divrei torah from the Rebbe shlita,

All the great number of man davened maariv with great kavana, having experienced a most inspiring Shabbos.  The Modzitzer Rebbe made havdala, and Rabbi Stern spontaneously sung very moving grammen that encapsulated the high emotions of all the participants.