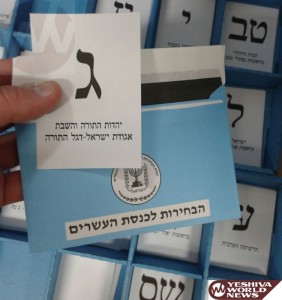 The Central Election Committee counted 406 votes for Yahadut Hatorah in voting station number 3 in the Israeli Arab municipality of Jassr a-Zarka. However, according to the original record for the voting station, those votes went to the Arab bloc and somehow, they were changed to Yahadut Hatorah.

The video shows this along with a picture of the screen from the Central Election Committee computer showing 72.37% of the vote in that station went to the chareidim – a less than likely occurrence on the best of days. The Arab bloc received no votes!

The original handwritten record shows 406 votes to the Arab bloc and zero for Yahadut Hatorah. It might be a simple error hitting the keyboard when the handwritten information was entered into the system.

In the Israeli Arab municipality of Um el-Fahm 458 votes went to the Economy Party, once again possibly a data entry error?