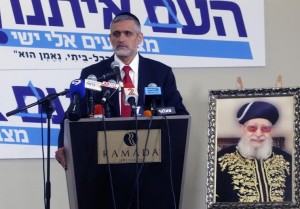 Three Yachad party activists suspected of throwing a firebomb at the Har Nof, Jerusalem home of Eli Yishai were brought to a remand hearing on Wednesday 5 Nissan. The court remanded all three to house arrest for five days. Two of the suspects are minors. They are also banned from Jerusalem until May 10, 2015.

It appears they are supporters of Yachad and came to the rally in support of Yishai and to protest election fraud with the bottle of flammable liquid to set tires ablaze but other supporters prevented them from doing so. At the end of the rally they distanced themselves a bit from the crowd, lit the bottle and left the area.

Yachad officials condemned their actions in a statement to the media.