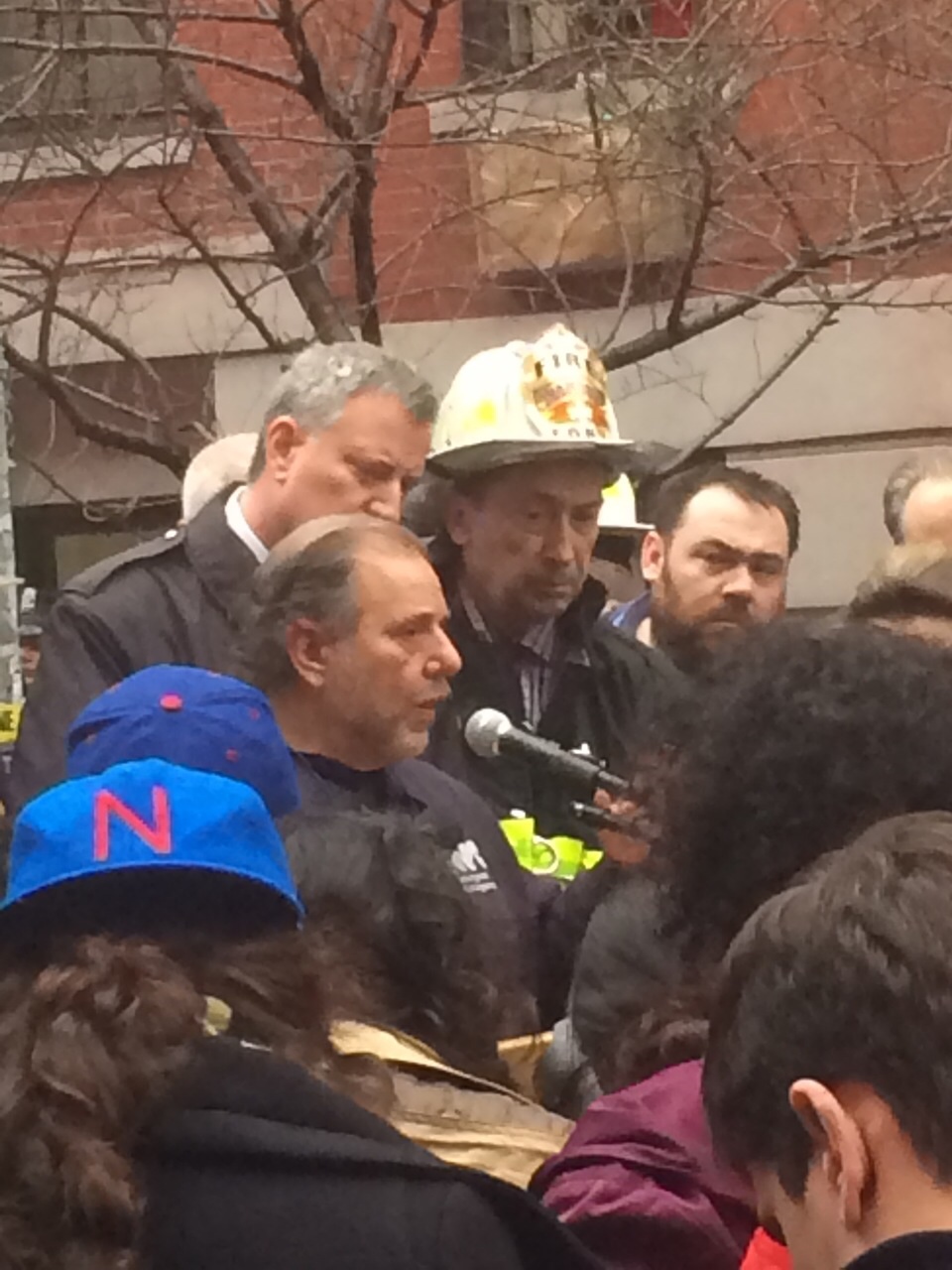 Mayor Bill de Blasio: We want to give you an update about the tragedy that’s occurred here at 2nd Avenue and 7th Street. Everything we’re going to tell you is preliminary, based on the information we have at this moment. Obviously, investigation underway – a lot of information being gathered, so we’ll be giving you regular updates.

I’d like to first acknowledge and thank for joining us Fire Commissioner Dan Nigro, OEM Commissioner Esposito, NYPD Commissioner Bratton, our first deputy commissioner – our First Deputy Mayor Tony Shorris, Buildings Commissioner Chandler, CAU Commissioner Carrion, HPD Commissioner Been. We have with us the president of Con Ed Craig Ivey. I’d also like to thank the elected officials who have joined us – Manhattan Borough President Gale Brewer, Council Member Rosie Mendez, and Senator Brad Hoylman. Others will be joining us.

The explosion here in the East Village affected four buildings. They are 119, 121, 123 and 125 2nd Avenue. The actual explosion occurred in 121, caused it to partially collapse, and 123 collapsed as well.

Preliminary evidence suggests a gas-related explosion. That investigation is ongoing. The initial impact appears to have been caused by plumping and gas work that was occurring inside 121 2nd Avenue. FDNY and all our first responders have responded. It is now a seven-alarm incident for FDNY, so they’ve been battling heavy fire conditions – so far, have contained the fire those four buildings. That’s an ongoing operation. And again, elements of FDNY, NYPD, OEM, DOB, HPD, and of course Con Ed are all at the scene.

We have the Department of Environmental Protection hazmat operation responding to check for the environmental impact and the health impact. The health department has information on its website regarding any health risk related to smoke – that’s nyc.gov/health.

A reception station has been set up at PS 63 – PS 63 at 121 East Third Street. This is a Red Cross site now to support residents of the buildings, neighbors, family members.

Our thoughts and our prayers are with every one of them and their families. And of course, we are praying that no other individuals are found injured, and that there are no fatalities, but that is an ongoing effort that FDNY and all other first responders are involved in.

I want to also commend the FDNY. This is a complex and difficult operation they’re mounting here, obviously doing everything they can to search for anyone who still may be in those buildings, but also to ensure that there’s not spread of fire to the surrounding buildings. And the FDNY, as usual, is doing an extraordinary job handling this very, very difficult situation.