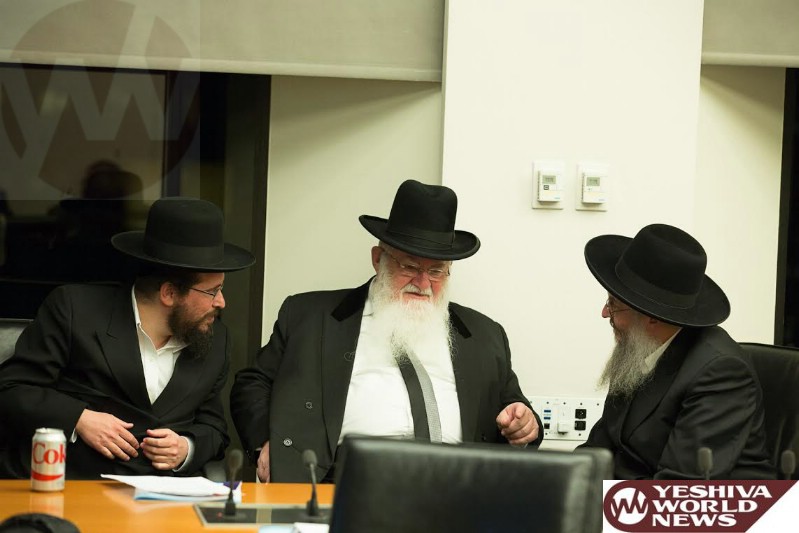 A prominent group of rabbanim and lay leaders met on March 18th for the first meeting of a newly formed Board of Directors in support of the Center for Arbitration and Mediation in Israel. The meeting was hosted by prominent Jewish leader Phil Rosen at Weil Gotshal. It has been over eight years since Israel’s Supreme Court ruled that the rabbinical courts of the Chief Rabbinate had “no jurisdiction” over monetary disputes, thus leaving the country without a national network of batei din for Choshen Mishpat issues. Israelis of all backgrounds, whether secular or religious have beseeched rabbanim and dayanim to establish Batei Din throughout Israel in accordance with Torah and Halacha.

The initiative to create the Center for Arbitration and Mediation was undertaken by prominent dayanim Rabbi Chaskel Solomon and Rabbi Benzion Nesher nearly three years ago. Tel Aviv’s Chief Rabbi Meir Lau is a member of the presidium of the Center, which quickly expanded to at least a half dozen cities throughout Israel, including Yerushalayim, Tel Aviv, Ashdod, Ashkelon, Rishon LeZion and Kfar Saba. Israel’s Chief Rabbis and a cross section of the rabbinic and political leadership throughout Israel support the Center. At conferences sponsored by the Center, rabbis, dayanim and other public figures from all over the country attended, enthusiastically supporting the Center.

“You cannot imagine how many secular Israelis prefer settling their monetary disputes in a bais din rather in Israel’s secular courts,” Rabbi Nesher said. “They recognize that a process that is guided by Torah and the shulchan aruch is the best way to deal with monetary issues.”

It is unfathomable that Israel of all places should not have an official rabbinical court for choshen mishpat,” said marketing expert Menachem Lubinsky. “Who but our Torah set the standards for fairness and justice in mitigating business disputes,” he asked.

Yoram Hacohen, legal adviser to the Center for Arbitration, described the level of professionalism of the botei din. He said that the Center often consulted experts to properly adjudicate cases. He thanked Mr. Rosen for hosting the event and Mr. Baruch Klein for sponsoring the inaugural meeting of the Board. Rabbi Solomon said that the Center needs to expand to other cities, embark on a broad educational campaign, train more dayanim, and even establish a robust website to answer halachic questions for Israelis looking for guidance in accordance with Torah and Halacha.

Rabbi Chaim Kohn, who heads the Business Halacha Institute in the US and is a noted dayan, gave his blessing to the newly formed Board and pledged the support of his Institute. Rabbi Solomon said that the Center would work closely with the Institute on disputes that involve both countries and that Rabbi Kohn would serve as the Av Bais Din of such an international bais din. Mr. Rosen thanked the prominent group for attending this important event.