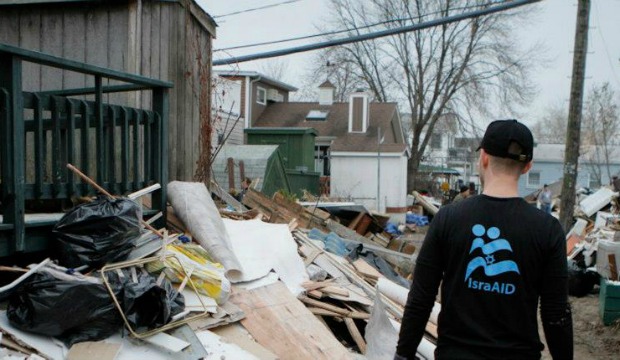 On Friday, March 13, 2015, Tropical Cyclone Pam lashed down on Vanuatu with category 5 conditions. On March 15, Vanuatu declared a state of emergency. President Baldwin Lonsdale called for international support while at a conference in Japan with UN agencies and IsraAID, stating, “I appeal on behalf of the government and people of Vanuatu to the global community to give a lending hand in responding to these very current calamities that have struck us.”

IsraAID responded immediately to the request, and dispatched an emergency relief team to the area. In addition to traveling to Eratap to meet the chief and assess the situation, the team also spent time in the capital city of Port Vila to coordinate efforts with government officials and UN agencies.

In a small makeshift shelter in the devastated village of Eratap, Mac and Katie recount how they and their two children Kancy and little Clara managed to survive the storm. “The cyclone howled so strongly, our children were terrified,” Mac recalls. The family was hoping to last out the storm in their home, but Cyclone Pam, with its 320 kph winds was just too much. With the roof caving in, the family somehow managed to escape to the local church before the Cyclone flattened their home.

The most urgent needs outside of the capital remain drinking water and food, and with access to remote islands hampering relief efforts, the situation is becoming a race against the clock to save the lives of thousands dying of starvation and thirst.

In the remote island of Tongoa in the Shepherds islands group, the situation is beyond desperate, explained the island’s representative to Parliament, Mr. BM John Amos, as he appealed to Yotam Polizer, IsraAID’s head of mission, for support: “We have no supplies, no food, no clean water. Last night three children died. Please help us.”

The team wasted no time. A list was quickly put together, kits assembled, and then moved to the harbor for loading. “There are so many islands here, it’s a logistical nightmare,” explained Yotam as he moved boxes of water and rice onto the boat. “The best thing we can do right now is respond to each appeal as it comes and try and reach as many people as possible. Time is against us but we will do whatever we can to help.”

The situation was the same all across the islands of Tongoa and Mataso, as the IsraAID team travelled from village to village to distribute supplies to struggling and desperate communities. In total, the team visited 12 villages and all eight schools on the island – all were completely destroyed.

The IsraAID emergency relief team in Vanuatu (IsraAID)The reaction to the team’s country of origin – Israel – has also been a pleasant surprise: “Everyone here loves Israel.” In another village, when David, a man who lost his house and whose water tank is now polluted heard that the team had come from Israel, he excitedly picked up a damaged Bible from his ruined living room, and opened to the page stating: “the light shines in the darkness.”

As the team ended its first visit, they left with the promise to return, as the entire island remains without clean water, food, medicine, electricity, schools, homes, and their crops were destroyed. IsraAID will continue to assist this and other remote islands in Vanuatu that are still reeling from the destruction of Cyclone Pam. In the coming days a third team will leave Israel, and will include medical and psycho-social staff, and a water engineer.