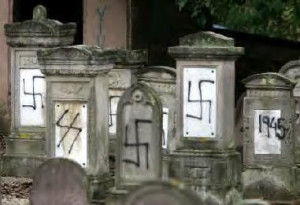 A Jewish cemetery in the southern Polish town of Olkusz was targeted by vandals including graffiti “Jews get out” sprayed on matzeivos. The name “Jan Pawel” was also painted on one kever, believed to be a reference to Pope John Paul II.

It is reported the cemetery does not have a guard and therefore, carrying out such an attack is easy.